About the Osprey Cam

A unique partnership is giving people a first-hand look into the life of a magnificent fish-eating bird of prey: The osprey.

An osprey nesting platform was erected in 2010 on the CLC Brainerd campus. Now, a high-definition live stream webcam gives viewers a clear look into the lives of these unique birds. It’s all thanks to a partnership between Central Lakes College’s Natural Resources Program, Crow Wing Power, Consolidated Telephone Company, People’s Security and Brainerd Public Utilities.

Thank you to all who submitted suggested names in the Crow Wing Power Osprey Naming Contest. Officers at the CLC Natural Resources Club recently selected the winning names. The pair’s names are Harlowe and Hercules.

Sometimes it takes several years for osprey to choose a new site to make their home, according to Pam Perry from the DNR. In spring 2012, the first pair of ospreys took over the platform at CLC, making their nest with sticks and moss. By fall 2012, two eggs hatched and the young ospreys were ready for flight.

In 2016, the pair returned in early April and laid 3 eggs.  All 3 hatched, but unfortunately one of the chicks died after about 3 weeks post-hatch, likely of disease.  The other two continued growth thru summer and both successfully fledged in September.

In 2017, the ospreys returned in mid-April, and had 2 eggs laid by the end of that month.  Unfortunately, within a week of beginning brooding, one day the eggs had disappeared.  The two adult birds kept coming to the nest for a few days after the egg disappearance, and then they too left the platform, not to be seen the remainder of the summer.  One can speculate that the eggs were preyed upon, either from below (a raccoon may have climbed the platform pole and preyed upon the eggs, most unlikely) or they were preyed upon from above (either a Bald Eagle or Great Horned Owl).  It is hopeful the adults will return to nest again in Spring 2018.

Last year the ospreys returned in the latter half of April, and began to set up shop on the nesting platform; however, after less than 2 weeks the birds suddenly disappeared and were not seen again the remainder of the summer.  Such an unexpected departure leaves little room for speculation as to why the pair left, but the hope is they will return in Spring 2019 to nest again.

Central Lakes College and its partners invite the community to watch our osprey friends through a high definition live stream webcam. See the miracle of life through the eyes of the osprey.

Osprey (Pandion haliaetus) are a large, slender hawk that spends summers in Minnesota and other regions of North America with lakes, rivers, and estuaries where they nest on trees and a variety of artificial structures including powerline poles. Osprey feed nearly exclusively on live fish. They have several unique adaptations which allow them to catch fish in the water, such as a modified shoulder joint that let them raise their wings high over their head to gain flight from the water’s surface.

In Minnesota, Ospreys typically return to their nests and mate in early April. Two to four eggs are laid and hatch around late May. Chicks typically remain on the nest until August, roughly eight weeks. At the end of summer, parents and offspring migrate independently to wintering areas in the southern U.S., Central, or South America.

To differentiate between the male and female, please note that the male is a little smaller than the female and has a pure white breast, while the female has brown speckles on her breast.

Ospreys build nests of sticks and branches on sturdy trees and artificial structures such as powerline poles and radio communication towers.  These nests are used for many years, with the birds adding new materials to the nest each year.  Osprey will also build their nests on artificial platforms, such as the one at Central Lakes College.  These artificial nest structures have been instrumental to Osprey recovery efforts following past population drops due to pesticide use and habitat loss.

Osprey breed across much of the northern half of North America where they can find access to water and structures to hold their nests. During late summer (August and September) they begin migrating to wintering areas in Central and South America. Some Osprey may spend their winters in Florida or other southern parts of the United States as well.

One to four eggs (usually 2-4) are laid in April or May and are incubated for about 35-40 days. Incubation begins when the first egg is laid with both parents taking turns. Additional eggs are laid at three day intervals which means that there may be as many as nine days separating the hatch of the first chick from the last chick. This strategy assures that the older, stronger chicks will survive in times of food shortages (with the younger chicks sometimes becoming a food source).

Chicks are incubated about ten days (from the hatch of the last chick). Parents remain close by to protect them from predators, such as crows and ravens, or to shade them from the sun during the midday heat. Chicks remain in the nest for about eight weeks when they begin taking flight. Afterwards they will return to the nest to be fed for another four to eight weeks. Following this the nests are more-or-less abandoned for the reminder of the year. 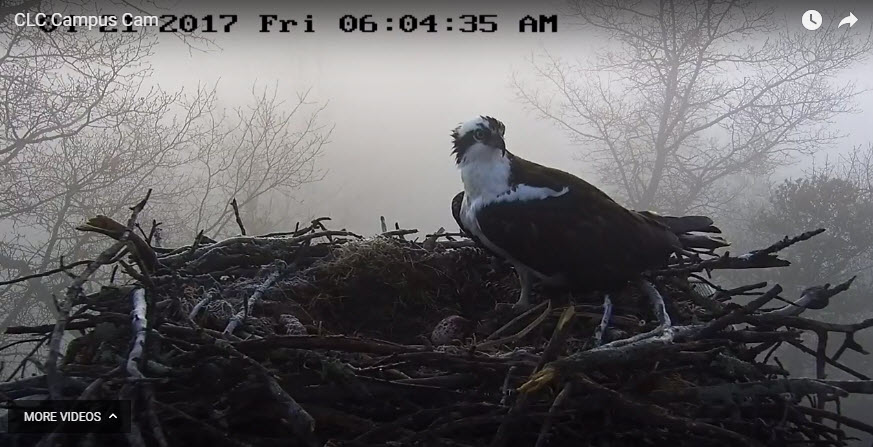