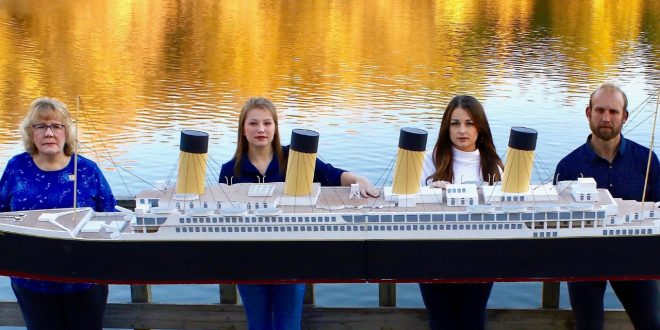 The year is 1992. A Norwegian fishing boat crew trawling the North Atlantic spots an iceberg. A dark figure dots the white background. As the boat pulls close to the ice, the crew is astounded to find a young woman, dressed in clothing from the early 1900’s. When they bring her aboard their vessel, she says only one word: ‘Titanic.’

These events are what propel Jeffrey Hatcher’s ‘Scotland Road,’ which will be presented as a streamed theatre event by Brainerd Community Theatre, beginning November 4.

“This play is a mixture of mystery, science fiction, and psychology,” said Patrick Spradlin, the play’s director. “With the added element of the sinking of the Titanic, it is a truly fascinating work.”

Because of COVID restrictions BCT is not able to perform the play in front of a live audience in their theatre space. Instead, the company has opted to produce the play for virtual audience attendance. “We’re using a television production approach to the play,” said Spradlin. “That means our at-home audience will be able to enjoy the play with all its nuances in a more intimate way than merely shooting the play from a long-distance, panoramic perspective. More close-ups, more directed emphasis on the key moments in the play. It should make for a really compelling ninety minutes.”

The company is rehearsing and shooting the play on the stage of the Chalberg Theatre on the Brainerd campus of Central Lakes College. The final version will be streamed over a private online channel. Instead of purchasing a ticket for a seat in the theatre, patrons will purchase a secure link to the streamed performance. Spradlin noted that the event is on demand, meaning audiences will be able to watch the production at their convenience. “This is one advantage to performances held at fixed times,” he said. “It’s at least one compensation of not being able to have live audiences in the theatre.”

“We’d rather have an audience in the same space as the actors, but that’s not possible at this time,” said Spradlin. “There’ve been some very successful streamed performances during this time—‘Hamilton’ comes to mind—and we’re working very hard to make this production as exciting and engaging as a live performance might be.”

The play takes place in a secure, sterile environment set up by John, a man obsessed with all things Titanic. After hearing of the young woman’s rescue from the iceberg, he has arranged for her to be brought to this location for study. Intent on either confirming her story or exposing her as a fraud, John has enlisted the aid of Dr. Halbrech. John orchestrates a number of scenarios intended to trip up the young woman’s story, going so far as to enlist the aid of Miss Kittle, the last known survivor of the Titanic disaster. What happens then takes an eerie and unsettling turn.

Jesse Brutscher plays the role of John. Brutscher if familiar to local theatre audiences for numerous roles in nearly every area community theatre. Maren Goff Martin plays Halbrech; she was last seen on the BCT stage in the production of ‘A Few Good Men.’ Macy Judd is The Young Woman. Judd appeared in the BCT summer theatre musical ‘The Marvelous Wonderettes.’ Miss Kittle is portrayed by veteran actor Barb McColgan who has delighted area audiences in many varied roles.

Tickets for ‘Scotland Road’ are available from the CLC Theatre Box Office. Phone sales are on Tuesdays and Thursdays from 10 a.m. to 2 p.m. at (218) 855-8199. Online sales and further information about the production are through the web site: www.clcperformingarts.com