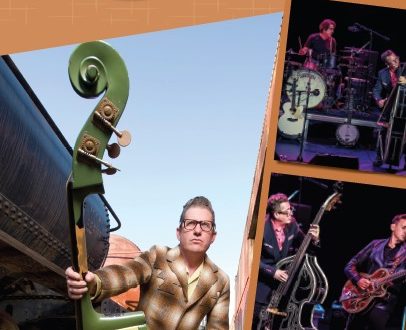 A true icon of modern popular music will take the Tornstrom Auditorium stage on April 26 when the Central Lakes Community Performing Arts Center presents Lee Rocker. The show, part of the Center’s Cultural Arts Series, kicks off at 7:30 p.m.

Lee Rocker made his mark singing, playing, standing on, spinning and rocking his giant upright bass in the legendary music group The Stray Cats. Grammy-nominated, The Stray Cats have sold nearly 10 million albums and garnered an astounding 23 gold and platinum certified records worldwide. Founded by Rocker, Brian Setzer, and Slim Jim Phantom, The Stray Cats remain a radio staple, were music video pioneers at the infancy of MTV, and repeatedly brought rockabilly music to the top of the charts.

“To have someone of this caliber, who has been a rock legend on an international scale, is really incredible,” says Series Producer Patrick Spradlin. “We’re really fortunate to bring someone of this stature to the area.”

Rocker describes his introduction to the world of rock ‘n roll: “At 16 years old I got myself an upright bass fiddle and I started a band. We would practice in my dad’s garage next to the Olds Delta 88. We would play until my fingers bled. I didn’t mind one bit. The music hasn’t released me yet and I know it never will. In the summer of 1980 the band moved to London and we called ourselves the “Stray Cats”. I got to say it’s been one a hell of a trip.”

In addition to his work with the Stray Cats, Rocker has recorded or performed with Carl Perkins, George Harrison, Ringo Starr, Willie Nelson, Leon Russell, Keith Richards, John Fogerty, and Scotty Moore. Rocker was nominated for a Grammy Award in 1982, as was his father. They are the second father-son duo to be nominated for a Grammy in the same year. He is considered to be one of the most influential upright bassists in rock ‘n’ roll. He continues to create new music, including his 2011 ‘The Cover Sessions’ EP, which put his Americana twist on classic 1970s radio hits; and 2012’s ‘Night Train to Memphis,’ an album he characterizes as “the soundtrack of my life” filled with classic rockabilly done like only Rocker can.

Rocker, Setzer, and Phantom announced earlier this month the Stray Cats were re-forming to both record a new release and tour both in the U.S. and abroad.

Tickets for Lee Rocker are available from the CLC Theatre Box Office at (218) 855-8199 or online at www.clcperformingarts.com

The concert is sponsored in part by Tito’s Handmade Vodka. The season is made possible in part by the voters of Minnesota through a Minnesota State Arts Board operating grant, thanks to a legislative appropriation from the Arts and Cultural Heritage Fund.