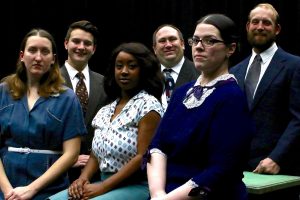 Brainerd Community Theatre will present “Bill W. and Dr. Bob,” which tells the amazing story of the two men who pioneered Alcoholics Anonymous, and of their wives. The play will be presented in the newly- refurbished Dryden Theatre, with performances on November 29-December 1 and December 6-7 at 7:30 p.m. An additional 2 p.m. matinee performance is scheduled for December 8.

Local audiences may recall two previous productions of the play, one a traveling professional production by the Illusion Theatre of Minneapolis in 2012, and another by BCT in 2015. BCT Director and play producer Patrick Spradlin recalls first seeing the Illusion production. “I’d never witnessed an audience like this one,” he recounted. “Everyone in the sold-out theatre seemed to know one another. They were the most attentive audience I’d ever encountered, and they stayed afterwards for over an hour to talk about the experience.”

Spradlin noted that he decided that evening to produce the play with a local cast. “We actually purchased the scenery from the Illusion production and did the play a few years later. Essentia Health got involved as a sponsor, and provided moderators for talk-back sessions after each performance.”

What struck Spradlin from this production was the bond the audience had with the subject matter, the characters, the story, and their willingness to share their own life experiences. “There is a significant part of the recovery community that attended those shows,” said Spradlin. “Not only those in recovery themselves, but family members and friends as well. The stories that were shared, the experiences described, the emotions that came to the surface during the talk-backs were every bit as compelling as the play itself.”

The play of “Bill W. and Dr. Bob” tells of a great American success story. Bill Wilson was an alcoholic who tried repeatedly, and unsuccessfully, to remain sober. During one particular hospital stay for ‘detox,’ he’d cried out from his hospital bed for divine mercy. Bill felt a white light blaze through his room, and believed he’d taken his last drink.

That belief was critically challenged on May 11, 1935, when Bill encountered a threat to his newfound sobriety. During a business trip to Ohio, he found himself standing in the lobby of a hotel, craving adrink. With growing anxiety he contemplated his options: order a cocktail in the hotel bar or call another recovering alcoholic and ask for help in staying sober. He found a church directory in the hotel lobby, called a local minister, and was put in touch with a local surgeon, and alcoholic, Dr. Bob. Bob agreed to meet in his home with Bill, but for only fifteen minutes. The meeting lasted for hours, with Bill telling Bob of his drinking history, something Bob immediately identified with. The two formed a friendship, and over the next three weeks Bob gained sobriety. The surgeon never took another drink after June 10, 1935. That day — Dr. Bob’s “dry date” — is officially counted as the start of Alcoholics Anonymous.

The play tells this story, and carries it beyond those beginnings to include the work done by the two men’s wives in forming Al Anon, a worldwide organization that offers a program of recovery for the families and friends of alcoholics, whether or not the alcoholic recognizes the problem or seeks help.

“You may think this is a really heavy drama,” said Spradlin, “and of course there are those moments in the play. But what is delightfully unexpected is the humor in the play, and the way these real-life characters are shown, warts and all, and not glamorized.”

The play is directed by Michael Sander, familiar to local theatre audiences for his work as a director at Pequot Lakes Community Theatre (“Spitfire Grill” and “Bus Stop, among others) and at BCT (“Five Women Wearing the Same Dress”). The cast consists of Jesse Brutscher and Mark Oliphant as the title characters. Each of them has appeared in numerous productions for BCT, PLCT, and Stage North Theatre, including leading roles in plays like “The Elephant Man,” “Cat on a Hot Tin Roof,” “The Seafarer,” “Spamalot” and “Young Frankenstein.” Their wives are portrayed by Karla Johnson (theatre director at Brainerd High School) and Bri Keran, long-time veteran of dozens of local productions, and a member of the 2015 BCT production. Their previous roles have been in shows such as “The Elephant Man,” “Rumors,” “Steel Magnolias,” and “Blithe Spirit.” Alex Erickson and Rachel Kline play a variety of characters integral to the play’s story. This marks Erickson’s debut at BCT. Kline has been seen in numerous productions in the area, most recently in “Young Frankenstein.”

“This will be the first production in the Dryden Theatre since our capital improvement drive this fall,” noted Spradlin. “We’re hoping our audiences will come and experience the play in this new environment, with brand new theatre-style seats, platforms, curtains, lighting and sound.”

Tickets for “Bill W. and Dr. Bob” are available from the CLC Theatre Box Office at (218) 855-8199 or online at www.clcperformingarts.com

The production is sponsored by Essentia Health and Birchwood Therapy Services. The entire season is made possible in part by an operating support grant from the Minnesota State Arts Board as part of the Legacy Amendment supporting the arts. 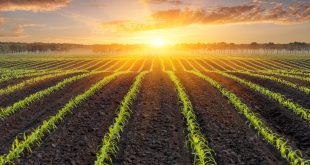 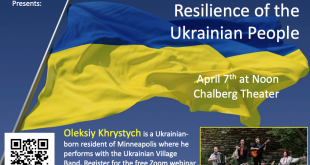