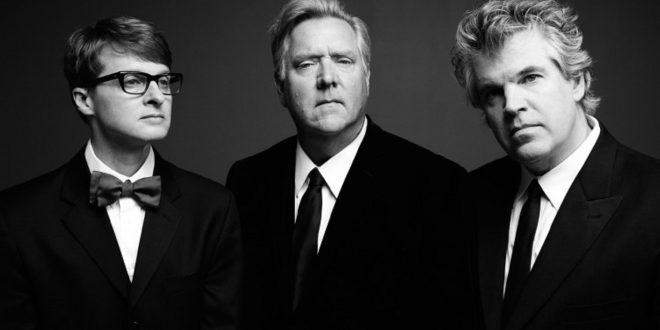 The New Standards, the nationally-acclaimed jazz trio known for their unique and refreshing approach to old standards, bring their show SCORE! to the John Chalberg stage on April 8 at 7 p.m. As part of the Central Lakes Community Performing Arts Center’s spring season, the show will be full of songs and themes from the group’s favorite cult and classic film scores.

“We presented The New Standards the year prior to the pandemic,” said CLCPAC Director Patrick Spradlin. “This show was scheduled for our spring 2020 season, but had to be rescheduled. We’re really fortunate to be able to fit them into our current season.”

The New Standards join special guest vocalists and a big band to play songs and themes from multiple film scores, presented with flair and filtered through their inimitable style. For this concert, the trio puts its spin on gems by jazz greats like Bacharach and Mancini, riff on European film scores that embody the moody cool of the 60’s and 70’s, and explore the genre-spanning musical themes of movies ranging from Bond to Batman to ‘Breakfast at Tiffany’s.’

Started in 2005 as Minneapolis based musicians and friends Chan Poling (piano), Steve Roehm (vibes) and John Munson (bass), The New Standards (TNS) has grown into a musical adventure. All three are fans of great songwriting. Sensing a lack of an interesting jazz trio repertoire beyond the usual “old standards”, they got together originally to play and sing their favorite songs – from every era, particularly post 1960’s pop music – in a stripped-down acoustic setting, making room for solos and arrangements with the freedom of jazz, and yet never fully abandoning the modest soul of pop and rock.

The three core members of The New Standards all come from illustrious Twin Cities bands. Chan Poling founded the seminal Punk/New Wave band The Suburbs. John Munson was an original member of Trip Shakespeare and the chart-topping Semisonic. And Steve Roehm started on drums in the Texas punk outfit Billygoat and the avant-jazz Electropolis.

The New Standards appear as a trio in intimate clubs like City Winery in NYC and The Dakota Jazz Club in Minneapolis, and also as the ringmasters of a widening array of talented musicians and guest artists in larger settings such as their popular Holiday Shows and dance-crazy extravaganza Variety shows.

SCORE! features the talents of the trio along with a horn and string section, additional musicians, and guest vocalists including Chris Koza and Aby Wolf.

Tickets for The New Standards SCORE! are available from the CLC Theatre Box Office at www.clcperformingarts.com or at (218) 855-8199.

This activity is made possible by the voters of Minnesota through a grant from the Minnesota State Arts Board, thanks to a legislative appropriation from the arts and cultural heritage fund.

Previous ‘Neither Wolf Nor Dog’ to Screen at CLC, Author in Virtual Attendance
Next Cultural Thursday: Puerto Rico