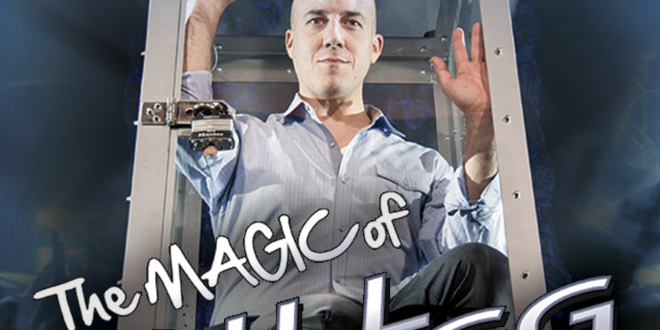 Audiences will be left amazed at what they see (or don’t see) when The Magic of Bill Blagg Live hits the Gichi-ziibi stage on April 1. The 7 p.m. show of large-scale magic and illusions is part of the Central Lakes Community Performing Arts Center’s Cultural Arts Series.

Center Director Patrick Spradlin says the date chosen for the performance was no accident. “What better April Fool’s gift can we give?” he asked. “We’ve not presented a talent like Bill. This will be a one-of-a-kind event for our audiences.”

Blagg is described by Spradlin as a personable, magnetic showman. “I’ve met him on several occasions at performing arts conferences around the country. He is incredibly engaging in real life, and his stage persona really mirrors that.”

Blagg formed his interest in magic began with a gift from his great-grandfather: a professional book of magic. As he studied the different effects in the book, he began constructing magic props with his dad.

He chose to put his skills to the test in 1998 by entering the adult stage competition at the Abbott Magic Get Together in Colon, MI, which is also hailed as the magic capital of the world. Magic had been Bill’s life for over twelve years. He had performed hundreds of shows, and it all hinged on a single five-minute routine: his dancing handkerchief. He had just turned eighteen, barely old enough to enter the competition, and he was about to make magic history by becoming the youngest contestant to ever win the prestigious event. Following his win, Bill never looked back.

Today, Bill is one of the nation’s top touring illusionists. His theatrical brand of magic thrills thousands of people every single year. Bill’s live performances leave people in complete disbelief as he creates the impossible in a way only he can do. Bill prides himself in performing new, never-before-seen illusions such as the world’s only rideable hoverboard. He is also known for instantly teleporting across theaters, squishing his body from 6 feet to 6 inches tall, passing through the blades of an industrial fan, and much more! Bill constantly receives standing ovations from those who experience his one-of-a-kind talents. He looks forward to sharing his blend of magic, personality and performance with you!

Entertainment Weekly summed up Bill’s appeal by saying, “Bill Blagg has a charm and style all his own; he’s definitely the best kept secret in magic!” Other accolades speak to the wonderment of Blagg’s show: ‘Unbelievable!’—USA Today; ‘A side-splitting spectacular!’—Chicago Tribune; ‘Houdini times ten!’—NBC.

Tickets for The Magic of Bill Blagg are available through the CLC Box Office (218) 855-8199 and online at www.clcperformingarts.com A family package is also available.

This production, and the entire season, is made possible in part by an Operating Support Grant from the Minnesota State Arts Board. This activity is made possible, in part, by the voters of Minnesota, through a grant from the Five Wings Arts Council, thanks to a legislative appropriation from the Arts and Cultural Heritage Fund.