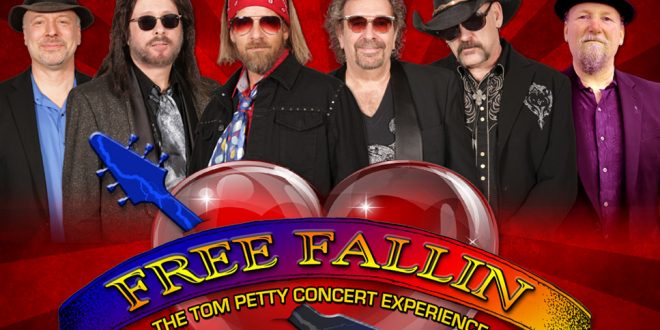 When he died in 2017 Tom Petty had achieved phenomenal success, amassing dozens of hits and performing sold out shows for four decades. Minnesota band Free Fallin’ celebrate this musical icon when they perform on the John Chalberg stage on Saturday October 3. The 7 p.m. concert is part of the Central Lakes Community Performing Arts Center’s 2021-22 Cultural Arts Series.

Series Producer Patrick Spradlin describes the show as the closest thing to an actual Petty concert as possible. “This band includes the instruments and costumes that re-create the authentic experience of a real Tom Petty concert,” said Spradlin. “I never got the chance to see Petty himself, but this group may be the next best thing.”

Free Fallin has successfully toured the country for almost 15 years and played before thousands of fans at many festivals, fairs, venues, and concerts. Along the way they have evolved into a complete and spectacular live music production. Their show features all the best hits of Tom Petty. Their 2018 “Broken Hearted Tour” played more than 90 shows in 15 states, and included an invitation to play for Tom Petty’s “Birthday Weekend” in his hometown of Gainesville, FL, where thousands of people from all over the world gathered to celebrate his music. The 2019 “Legacy Tour” played almost 20 states, and their current “For Real Tour” has them playing big stages throughout the country.

“We’ve been doing it for nearly 15 years and we’ve taken great care in the way we present the music,” said Mark Larsen, the group’s bandleader, manager and drummer.

“There’s an enormous emotional outpouring from people that come and see us,” Larsen said. “We do a little meet-and-greet thing after each show, and it’s amazing the people that come up, and they’re just moved, moved to tears, some of them. We have grown to appreciate the artistry involved in Tom’s songwriting. We go into each show and we remind ourselves that we are paying tribute to Tom and paying tribute to his artistry.”

Patty’s catalog of hits is well-known to rock fans around the world, with songs like ‘Don’t Do Me Like That,’ ‘Refugee,’ ‘Stop Dragging My Heart Around,’ ‘I Won’t Back Down,’ ‘Learning to Fly,’ ‘Mary Jane’s Last Dance,’ ‘The Waiting,’ ‘You Don’t Know How it Feels,’ and the song from which the band took its name, ‘Free Fallin.’

“He was a trendsetter,’ said Larsen. You go back and look at the early days of MTV. He owned MTV for about five years,” Larsen said. “I mean, every time you turned it on, you saw one of his videos. His songwriting is ageless. It will live on for generations.”

“Over the years, we’ve established a relationship with Tom’s management company,” Larsen noted.

Portraying Petty on stage is Tom Brademeyer, a Minnesota resident. “I’ve been listening to his music since I was 13,” Brademeyer said. The lead singer and guitarist points to the 1989 album

‘Full Moon Fever,’ a solo Petty record that he did without his longtime band, the Heartbreakers. “That’s pretty much the record I discovered him with,” Brademeyer noted.

One of his favorite Petty tunes to perform is 1981’s ‘The Waiting.’ Another coveted track is ‘You Wreck Me,’ off of Petty’s 1884 release ‘Wildflowers’. “It’s a good upbeat song to do,” Brademeyer said. “It’s one that we do really well.”

Brademeyer admires the lyrical content of Petty’s compositions. “You can connect it to your own life,” the musician assured.

Larsen said that in addition to enduring musical fare such as “American Girl,” there are “little bits of history” related to Tom Petty and the Heartbreakers that will be dispensed during the course of a concert.

The rest of Free Fallin’ is made up of Karl Swartz, lead guitarist, bassist Russ Lund, keyboardist Dale Peterson and guitarist/keyboardist Craig Wolke.

Tickets for Free Fallin’ are available from the CLC Theatre box office at (218) 855-8199 or online at www.clcperformingarts.com Patrons are recommended to review the COVID policies in effect for the concert on the same web site.