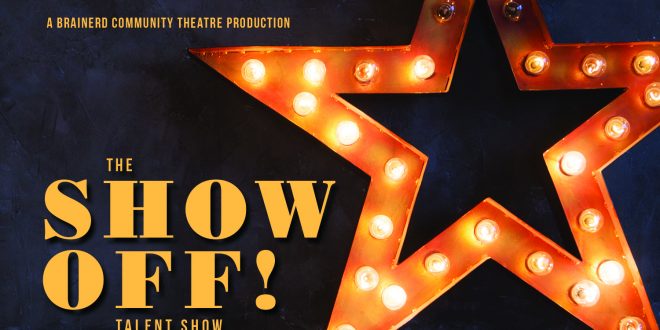 Brainerd’s Got Talent! Show Off! Talent Show at CLC

Do you have a talent for singing? Dance? Juggling? Telling jokes? Are you weary of the pandemic shut-down forcing you to keep that talent behind closed doors? The Central Lakes Community Performing Arts Center has just the remedy! “Show Off!” a low-key, low-pressure talent show will hit the outdoor stage at CLC on April 24.

‘Show Off!’ organizer George Marsolek called the event an opportunity to shine. “There are a lot of people in the area with incredible talent. We rarely get to see them, so this show provides a stage for them to literally show off.”

Center Director Patrick Spradlin pointed to the success of the organization’s holiday talent show as the driving force behind ‘Show Off!’ “We had an incredible outpouring of local talent for the holiday show, on Zoom and in controlled ways on our stage. We streamed the show to the world, literally, and were really pleased with the response. Now that nicer weather is returning, it’s time to take this talent and put it before a live audience.”

The event has been soliciting entries for a few weeks. “We want to give a final chance to anyone who might be interested to get on board,” said Marsolek.

The guidelines for the event are: performance can be a maximum of 5 minutes; it can be of any style or variety (dance, singing, playing an instrument, juggling, magic, etc.); performers under 18 must have a parent or guardian’s signature on the entry form; group performances are limited to 8 performers.

All COVID-related precautions will be in effect for both performers and audience members. As these protocols may change in coming weeks, it is advised that participants check with Marsolek as to which are in effect. Audience members are advised to check the CLC website for updated information (www.clcmn.edu).

“We want to make this super easy, super fun,” said Marsolek. “We will give prizes to the top performers, as judged by audience response, but that’s not the reason for the event. We just want people to have fun and share their talents.”

A panel of performing artists will make brief comments after each performance, offering their take on the act. The audience will be the final judges of which performance is crowned ‘best of show.’

The event is open to anyone, all ages and all talents. Anyone interested in taking part in the April 24 event must submit an entry form by April 7. Forms are available from George Marsolek at george.marsolek@clcmn.edu

The performances will take place at 2 p.m. on April 24 on the outdoor stage on the south lawn of Central Lakes College’s Brainerd campus. A rain-out date of May 1 is also on the schedule.

Previous CLC to host Cultural Thursday event on Ethiopian culture
Next CLC Connection: Better than ever! New programs, opportunities and experiences at CLC this fall