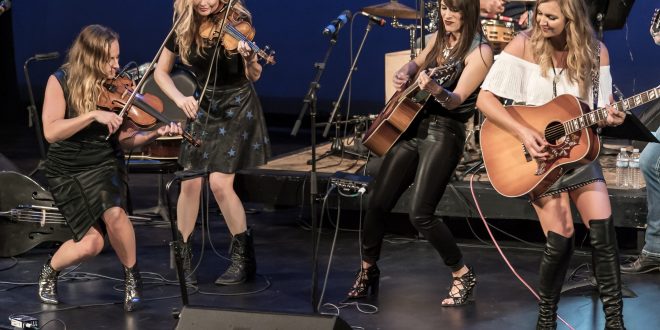 Direct from Nashville—Farewell Angelina to Perform at CLC

Named after a haunting Bob Dylan song, Farewell Angelina will perform on March 21 as part of the Central Lakes Community Performing Arts Center’s Cultural Arts Series. The 7:30 show will be in the Chalberg Theatre on the Brainerd campus of Central Lakes College.

Farewell Angelina is an all-female country group with four powerhouse vocalists, dynamic songwriters and accomplished multi-instrumentalists. Their stellar blend of heart-stopping harmonies over blazing double violins and guitars has earned soaring praise across the board. ‘Roughstock’ calls them a “superstar act… with killer songs.” ‘Rolling Stone’ says “Wickedly smart songwriting delivered with a healthy dash of sass… deft playing… into one sonic knockout punch.”

“We are so excited to have this band as part of our season,” said Series producer Patrick Spradlin. “We try to have different types of music in our season, and country music is very popular in this area. These four women are incredibly talented, and so personable. It will certainly be a fun evening of music, with terrific audience interaction.”

A band of longtime friends, Nicole Witt, Andrea Young, Lisa Torres and Ashley Gearing all met pursuing their dreams in Nashville. Each deeply respected and admired one another while they were building successful solo careers, touring and recording with top artists, and writing songs for some of country music’s biggest hitmakers. When they heard the undeniable magic of their voices together for the first time, they couldn’t wait to take their show on the road. Major opportunities soon followed, including singing the National Anthem for Thursday Night Football, The Unbridled Eve Gala for the Kentucky Derby, the ACM All-Star Jam, and festivals in Switzerland, Norway, Spain and France.

Farewell Angelina’s chemistry lives in watching each other shine, and most of all, creating moments every night with the country music fans they love so much. The relationship they share with their fans won them the fan-voted “Hot Seat”spot on the Taste of Country 2017 “RISERS” program by over 20,000 votes. They’ve also been named among Rolling Stone’s “New Artists You Need

To Know” and Roughstock’s “Ones to Watch” with a tour schedule to prove it. The girls have opened shows for the likes of Kenny Chesney, Old Dominion, Frankie Ballard, Jake Owen, Billy Currington, Maroon 5, and Trace Adkins, to name a few. The girls joined the Bacon Brother’s (Kevin and Michael) as the opening act on many dates of their last two summer tours. In 2019 they headlined their own “Women and Wine Tour” to packed crowds across the US and Europe, closing out the year having played over 80 shows.

The band’s highly anticipated “Women and Wine” EP (that the band co-produced) was released on January 25th, 2019 to rave reviews. ‘Music Row’s’ Bob Oermann says, ”This female quartet has flawlessly rehearsed vocal harmonies to spare. The shimmering, echoey production is lovely. The song is super contemporary: “You know only two things get better with time, women and wine.” Welcome to the winner’s circle.”

CMT celebrated with a worldwide premiere of the band’s music video for the single, “Ghosts,” which was #1 on the CMT 12Pack Countdown for 3 weeks and held within the top 3 for 6 weeks. Billboard debuted the band’s second video of the year on September 5, 2019 called “More Problems.” Billboard’s Annie Reuter says, “Alongside warm pop-country production, stunning harmonies and a sing along chorus, “More Problems” is an earworm that’s the perfect respite to the end of the summer.” CMT also released the video as a part of their “Next Up Now” platform.

Tickets for Farewell Angelina are available from the CLC Theatre Box Office at (218) 855-8199 or online at www.clcperformingarts.com

The concert is sponsored by Bruce and Kathy Buxton. The entire CLCPAC season is made possible in part by an operating support grant from the Minnesota State Arts Board, thanks to a legislative appropriation from the Arts and Cultural Heritage Fund.

Previous Rosenmeier Forum: The 2020 Census – What You Need to Know
Next CLC’s spring break extended March 16-22