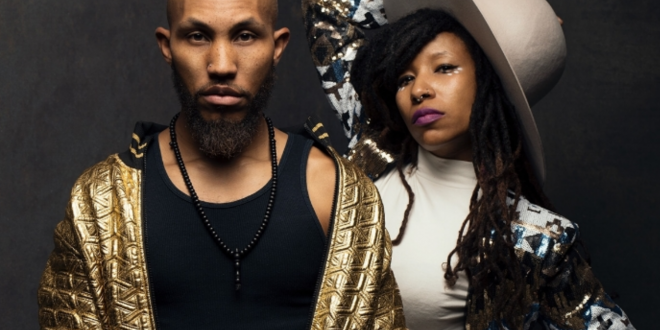 Hip-hop duo The Reminders at CLC

Blending soulful sounds and roots music with insightful messages and thoughtful lyrics, the husband/wife hip-hop duo known as The Reminders will electrify CLC’s Dryden Theatre when they perform on January 22. The 7:30 performance is part of the Central Lakes Community Performing Arts Center’s Cultural Arts Series.

Series producer Patrick Spradlin sees the Reminders as a bit of a departure from the season’s other offerings. “This is our first foray into hip-hop music,” he said. “I included this particular group, The Reminders, in our season because of their musical talent and the positive, uplifting messages they bring. They are widely known throughout the country for the power of their music and for their inspirational effect on their audiences.

The duo consists of Brussels-born emcee Big Samir and Queens-born emcee/ vocalist Aja Black, a collective creative force that’s hard to beat. Big Samir weaves intricate rhythmic patterns with a bilingual French/English flow, displaying his street-smart credibility in both his lyrics and cool demeanor. This is beautifully complimented by Aja Black’s confident delivery, diverse cadences, and unique vocal stylings. The two have an undeniable magical chemistry as they share more than lyrical abilities and stages; the couple shares a partnership in both music and life as Samir and Aja have been married for almost a decade.

A married hip-hop duo is unusual, but that’s not what makes the Reminders particularly noteworthy. They have made waves in the socially conscious hip-hop scene because of their thoughtful approach to crafting a meaningful message with each release.

“There are songs that reflect how we both feel, that stem from a conversation, and we take that and turn it into a song,” says Samir. “That’s the more fruitful songs that we have, where we both share the same idea and we turn our conversation into a song.

“There are other times where one of us may come up with an idea and share it,” he adds. “Then the other one basically adds the extra spices on it, and vice-versa.”

The Reminders have been recognized and applauded for their work internationally through concerts, tours, music awards, TV and radio appearances, and their incredible and dedicated fan base. Having shared the stage with artists such as Les Nubians, Snoop Dogg, Fishbone, Barrington Levy, Nas, Mos Def, Big Boi, KRS-One, Rakim, K’Naan, and others, the Reminders have established a firm place in today’s ever-evolving music scene, garnering international acclaim while paving a path all their own. Beyond performances and appearances, the duo is constantly and actively engaged with community organizations, schools, and universities delivering workshops, talks, and specially catered performances.

“What I particularly like about their coming to Brainerd is that they’ll do community outreach to the schools,” said Spradlin. “Whenever we can connect the artists with the public in this way, it’s a much more satisfying event.”

Tickets for The Reminders are available from the CLC Theatre Box Office at (218) 855-8199 or online at www.clcperformingarts.com

The show is sponsored by the Graphic Design program at Central Lakes College.

The season is made possible in part by the voters of Minnesota through a Minnesota State Arts Board operating grant, thanks to a legislative appropriation from the Arts and Cultural Heritage Fund.