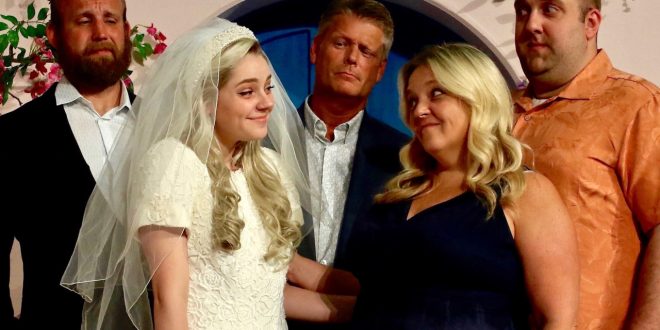 One of Broadway’s most enduring and endearing musicals will explode on the Chalberg Theatre stage when Brainerd Community Theatre presents ‘Mamma Mia!’ as the final production of its 50th Anniversary Summer Theatre Season. The musical opens on August 27, continuing through the 30th, and resumes for a final run of September 4-7. All performances are at 7:30 p.m.

‘Mamma Mia’ is the seventh-longest running musical in London’s West End, and the ninth-longest in the history of Broadway musicals. The show draws upon the music of ABBA, the internationally-popular music group that had multiple number one hits between 1972 and 1982. Using such well-known songs as ‘Waterloo,’ ‘The Winner Takes it All,’ ‘Dancing Queen,’ and the title song, the musical is set on small Greek island. Sophie dreams of the perfect wedding, but is plagued by one mystery: she doesn’t know the identity of her biological father. To have the perfect wedding, Sophie wants her father to give her away. After finding and reading her mother’s diaries, she invites to her wedding three men who are the likeliest candidates. The resulting collision of the past with a dreamed-of future challenges the relationship Sophie has with her mother, Donna, and provides the other wedding guests with an unexpected drama.

The musical is directed by Amy Borash, long-time actress in and director of local theatre productions and dance instructor at Music General Dance Studios. Borash is also the choreographer, and plays the role of Donna opposite her real-life daughter Sylvia. Brainerd Community Theatre director and show producer Patrick Spradlin sat down with Borash and asked her about this experience.

Spradlin: Why did you want to take on ‘Mamma Mia!,’ a really large and challenging show?

Borash: To start with, I have always loved Abba music.  It’s the type of music that has always made me want to sing along, get up and dance and it just generally makes me happy.  When I couple all of that with my genuine love for theatre and directing, it seemed like a no-brainer.  When I finally saw it live for the first time, that really solidified my desire to direct it or at the very least, be a part of it in some way.  The fact that it has massive audience appeal is just a bonus.

Spradlin: You’re directing, choreographing, and acting in this production. Isn’t that terribly difficult?

Borash: The directing/choreography isn’t a challenge for me at all, and in fact I do it for all the shows I direct.  Being IN the show – especially in the capacity of a lead character – has a very specific set of challenges.  Namely, I cannot sit back and observe, dissect and digest the action on stage in the same way I normally do because I am part of it.  To that end, I think the key is delegating and trusting the people you have surrounded yourself with.  I have a very capable stage manager, with many years of experience, and I have enlisted the help of some of my other director/theatre friends to come in at various points during the rehearsal process to be my eyes and ears for scenes I am part of.

Spradlin: Speaking of the cast, you have some very talented actors in this production.

Borash: I do! I know local audiences will recognize many of the actors in the leading roles. Sharon Hartley and Liz Davies play the two best friends of Donna, the three of them once being part of a rock group in their earlier days. The three possible dads are played by Jesse Brutscher, Travis Chaput, and Kevin Boyles. Alex Erickson plays Sky, fiancée to Sophie, who is played by Sylvia Borash.

Spradlin: Sylvia is your daughter. What’s it been like to play mother/daughter on stage when the two of you have that relationship in real life?

Borash: I am very excited to share the stage with her, I’m extremely proud of her and have always imagined being able to be involved in an onstage production together.  I think there are certainly parallels with the relationship between Sophie and Donna and ANY mother/daughter pair.  There is the desire of any mom to protect their child, to make sure they are making wise choices, and there is the desire of the child to pull back and forge their own way.  There are moments in this show—the song Slipping Through My Fingers comes to mind— that are very poignant to me right now.  I will be an “empty nester” this fall for the first time, so this transition is very comparable to watching your child get married and take steps into independent adulthood.  I literally have to think of something else when I sing the song so that I don’t become too choked up.  Add to that the fact that my daughter is being costumed in my ACTUAL wedding dress, and you can well imagine how that song is particularly relevant and emotionally charged for me.

Spradlin: Many people may be more familiar with the film version of ‘Mamma Mia!’ than the stage musical. How do the two compare?

Spradlin: What would you say to anyone who might be on the fence about coming to see ‘Mamma Mia!’?

Borash: Audiences should come and see ‘Mamma Mia!’ because it is a show that will leave them feeling good.  It’s fun and heartwarming and funny!  Honestly, it’s a great way to squeeze the very last drop of “vacation” out of summer vacation!   Who wouldn’t want to hold onto the warm weather for just a little bit longer…right?

In addition to Borash, the creative team for ‘Mamma Mia!’ includes sets designer Tim Leagjeld, costumes by Sharon Hartley and Deb Binda, lighting by Heidi Eckwall. George Marsolek is technical director for the production, and Ben Kent is master electrician. The production stage manager is Kay Churchill. Show photography is by John Erickson of Art Matters Studio and Gallery.

Tickets for ‘Mamma Mia!’ can be purchased from the CLC Theatre Box Office at (218) 855-8199 or online at www.clcperformingarts.com