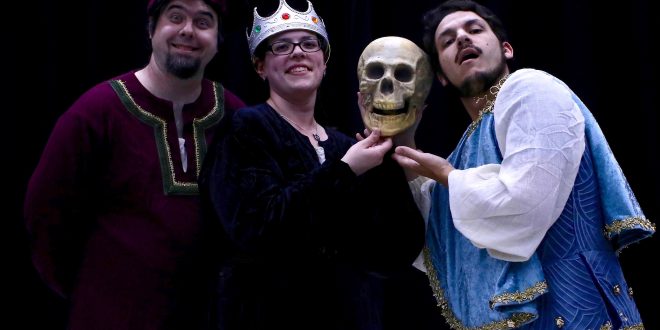 The second offering in Brainerd Community Theatre’s summer season is the zany comedy ‘The Complete Works of William Shakespeare (Abridged).” Performances are at 7:30 p.m. July 15-17 and 22-24 in the Dryden Theatre on the Brainerd campus of Central Lakes College.

Originally conceived and written by Daniel Singer, Jess Winfield, and Adam Long as members of the Reduced Shakespeare Company, the play distills over 100 hours of the plays of William Shakespeare into just over 100 minutes. To accomplish this, there is certain license taken in the presentation of the various plays. The three actors who take on this feat must assume a variety of roles, regardless of their ability to be convincing in those roles.

BCT Director Patrick Spradlin noted the play was chosen for a number of reasons. “We have some very talented physical comedy actors in this area, so I knew we’d be able to cast it,” said Spradlin. “Because this is such a wild, outrageous play I knew our summer audiences would welcome it. And, it’s just plain fun for everyone working on it and seeing it from the audience.”

All veterans of the BCT stage, the cast includes Shane Keran, Bri Keran, and Nick Kory. “They are the ‘Special K’s,’ said Spradlin, noting the repeating initials of their last names. Shane has been seen in such comedic roles as Lancelot in ‘Spamelot,’ Randall McMurphy is ‘One Flew Over the Cuckoo’s Nest,’ and in a host of other shows like ‘Season’s Greetings’ and ‘It Runs in the Family.’ Bri has been appreciated by audiences for her roles in shows like ‘Nunsense,’ ‘Steel Magnolias,’ ‘Boeing, Boeing,’ and ‘The Foreigner.’ Nick was most recently seen in ‘A Few Good Men,’ but has displayed his comic chops in plays like ‘The Servant of Two Masters,’ ‘Dearly Departed,’ and ‘Jack the Ripper.’

From there it’s off to the races as they begin with a parody of ‘Romeo and Juliet.’ Next, they do a parody of ‘Titus Andronicus,’ portraying it as a cooking show. Following it is ‘Othello’, which is done through a rap song. The rest of the first act demonstrates most of the other plays. All the comedies are combined into one convoluted reading (the justification being that they all recycle the same plot devices anyway). All the histories are acted out through a sporting event. Other Shakespearean plays receive a truncated treatment, making for hilarious results. At the end of the act, the characters realize that they forgot to perform ‘Hamlet,’ Shakespeare’s greatest work.

Director Laura Marsolek leads the trio through their comic twists and turns. Marsolek has appeared in several area theatre productions, including ‘Spamalot’ and ‘Relatively Speaking.’ She directed ‘The (Almost) Totally True Story of Hansel and Gretel’ for BCT, and has conducted improvisation workshops for the past year. Her training in improvisation served this production well, as much of the action of the play depends on improvisational skills.

Critical reviews of the play have been universally glowing. “A madcap condensation that features nonstop laughs. There is no doubt that William Shakespeare himself … would approve.” —Daily Variety

“If you like Shakespeare, you’ll like this show. If you hate Shakespeare, you’ll love this show!” —The Today Show. “Stupendous, anchorless joy!” —The London Times. “The funniest show you are likely to see in your entire lifetime.” —The Montreal Gazette. “Gloriously, relaxingly funny.” —The Financial Times. “Shakespeare as it was back in the Bard’s day: bawdy, irreverent, sublimely entertaining.” —The Miami Herald.

Tickets for ‘The Complete Works of William Shakespeare’ are available from the CLC Theatre Box Office at (218) 855-8199 or online at www.clcperformingarts.com