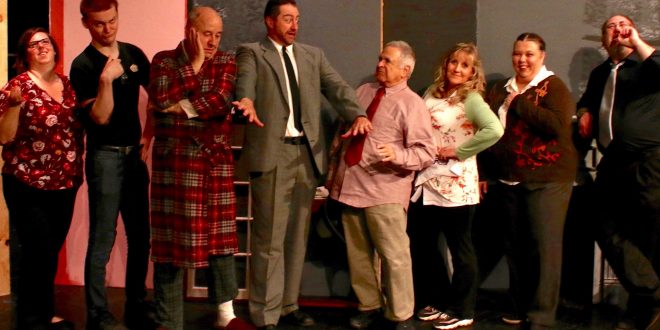 From the late master of American comedy, Neil Simon, comes Brainerd Community Theatre’s first summer theatre production commemorating the organization’s 50th anniversary. ‘The Sunshine Boys’ will open on June 25, with performances nightly through the 28th, and finishing with additional shows July 1-3. All shows are at 7:30 p.m. in the Chalberg Theatre on the campus of Central Lakes College.

BCT’s director Patrick Spradlin notes the significance of this anniversary season. “It was in 1969 that the administration of Brainerd State Junior College hired their first instructor/director to start up a theatre program at the college,” Spradlin said. “That director was Bob Dryden. His first show was another Neil Simon classic, ‘The Odd Couple.’”

Although theatre was being done in the Brainerd area prior to Dryden’s arrival, “this marks the official establishment of a program with classes being taught and productions scheduled on a regular basis,” said Spradlin. “Bob recognized from the start that although the program was part of the college, it would not survive without direct community involvement. So the theatre has always been, realistically speaking, a community theatre.”

“We chose to open with ‘The Sunshine Boys’ for a couple of reasons,” explained Spradlin. “First there is the obvious connection of producing another Neil Simon show, just like 1969. We also pay homage to Neil Simon, one of the greatest comedic playwrights of all time, and his recent passing. And, we think this is one of his more enduring works.”

‘The Sunshine Boys’ tells the story of Al Lewis and Willie Clark, two faded stars of the Vaudeville circuit, once beloved and now mostly forgotten. At their height, Lewis and Clark made multiple appearances on the Ed Sullivan Show and headlined all the major performance venues. When Lewis decided to hang it up and leave the act, he left Clark in the lurch. For twelve years the former partners have not seen or spoken to one another.

Now, they’re presented with a chance to reunite for one more performance of their most famous comedy sketch as part of a television special. It takes a lot of persuasion to move Willie, who believes he was wronged by Al, to agree to the deal. The two men meet, catch up, rehearse—and then the wheels come off as old grievances and grudges bubble to the surface.

“This play is Neil Simon at his finest,” said Spradlin. “Simon wrote such witty dialogue that sometimes it seemed out of place coming out of the mouths of his characters; everyone in his plays was a comedian. Here, the two main characters ARE comedians, so it all fits together really well.”

Portraying the two Vaudeville stars are Spradlin and M.S Bernard, a local actor and director well known to area audiences. “He and I have been talking for a long time about doing a show together in circumstances where we were both on stage; this has been a perfect opportunity and a real delight,” said Spradlin. Bernard has been seen on stage in BCT productions like ‘Spamalot,’ ‘A Funny Thing Happened on the Way to the Forum,’ ‘The Seafarer,’ ‘The Elephant Man,’ ‘Rumors,’ and most recently ‘A Few Good Men.’ He’s taken lead roles in Pequot Lakes Community Theatre productions such as ‘My Fair Lady’ and ‘Beauty and the Beast.’ Bernard’s directing credits are numerous, including shows like ‘Five Women Wearing the Same Dress,’ ‘The Spitfire Grill,’ “Bye Bye Birdie,’ ‘Bill W. and Dr. Bob’ and ‘Bus Stop.’

Spradlin has been a theatre instructor at CLC since 1992, and director of BCT since 2012. He has directed over 70 productions since that time, and acted in several others. Most recently he was seen onstage in “The Woman in Black.”

Local actor Kevin Yeager plays the role of Ben, nephew to Willie and the driving force behind the effort to reunite the squabbling pair. “Kevin is a really gifted actor who gives memorable performances in dramas, comedies and musicals,” said Spradlin. “He really shines in dramatic roles, as he did in ‘A Few Good Men,’ ‘Cat on a Hot Tin Roof,’ and ‘The Elephant Man.’ But he turns in hilarious comedic performances, too, and in this play he is the perfect harried, besieged man who is put in the impossible role of trying to broker a peace between two men who have no intention of burying the hatchet.”

The cast is also made up of Lisa LeBlanc, a veteran of Little Falls community theatre productions; Jennifer Anderson, who most recently wowed audiences of Pequot Lakes’ ‘The Addams Family’ with her zanily maniacal rendition of Grandmama; Charlie Johnson, a long-time performer as both actor (most recently in ‘Young Frankenstein’ as the deceased Victor) and member of numerous pit bands and orchestras; Marc Oliphant (Dr. Bob in ‘Bill W. and…’ and Ernie in ‘Rumors’) as the TV studio director; and C.J. Nichols (Pvt. William T. Santiago in ‘A Few Good Men’) as the harried and much put-upon assistant Eddie. Rachel Martin appears in a role created especially for her unique personality: Card Girl.

Long-time area director Beth Selinger heads up the production. “Beth was a perfect choice for this play,” said Spradlin. “She has a real connection with the material, and has unearthed a lot more than wisecracking jokes, which is testament of a true director.” Selinger has been known for her work with area theatres directing shows like ‘Boeing, Boeing,’ ‘Steel Magnolias,’ and ‘Joseph and the Amazing Technicolor Dreamcoat.’ She is also, with husband Dan, founder of the now-closed Cream of the Crop Theatre in Randall.

The set is designed by Tim Leagjeld, long recognized as the premiere set designer in the Brainerd Lakes Area. Lighting and sound is designed by Ben Kent, with Dawn Krautbauer costuming the play. George Marsolek is technical director.

As part of the 50th Anniversary season launch, ticket prices for ‘The Sunshine Boys’ have been rolled back to 1969 prices. “Bob told me that when he first came to Brainerd, tickets to theatre productions were 50 cents. He thought that cheapened the value of the shows, so he raised prices to $2. We are so happy to reflect this bold step by lowering our prices for this show,” said Spradlin.

Tickets for ‘The Sunshine Boys’ are available from the CLC Theatre Box Office at (218) 855-8199 or online at www.clcperformingarts.com

This production, and the entire season, is made possible in part by an Operating Support Grant from the Minnesota State Arts Board, as part of a legislative appropriation through the Legacy Amendment.