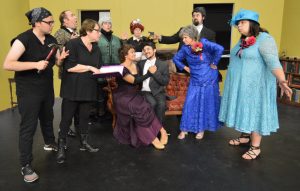 Take a troupe of moderately talented actors, a bulldog stage manager, a disorganized director. Add a wannabe Shakespeare who’s written a play she just can’t help ‘improving’ on a daily basis. Give them all three days before opening night, when pressure is at its greatest. Shake it up, and what you have is “Play On!”, the Brainerd Community Theatre summer production. Opening on July 6, the play runs nightly at 7:30 on July 6, 7, 8, 13, 14, and 15 in the Chalberg Theatre.

Director Patrick Spradlin describes the play in this way: “If you’ve ever been in play, worked backstage on a play, or had the misfortune of seeing a really bad performance of a play, this show is for you.”

The cast of the murder mystery ‘Murder Most Foul’ find themselves up against it from the very start. There are tensions among the cast, with a prima donna actress jockeying for the limelight, her henpecked husband, a sarcastic villain who can’t resist pushing everyone’s buttons, a bobble-head leading lady with an uncanny talent for mispronouncing her lines. Add a novice high schooler who spends more time studying for her upcoming tests than being engaged in the play, and a leading man with a yearning for the leading lady.

Add to this a director who can’t find her script, a bulldog of a stage manager, and a technician who seems to know nothing about stagecraft. Already the recipe for disaster is complete.

The wildcard in all of this is the playwright, so self-absorbed and self-important that she thinks she make ‘minor’ changes to the script on a daily basis: new characters, new names, new plot twists, and even a new title.

With three days before opening, as the actors struggle to learn the lines as they are being changed, the technician tries to complete the set and get all the sound cues, the playwright once again inserts herself into the fray.

“I’ve lived a lot of this play over the many years I’ve done theatre,” says Spradlin. “The humor of this play comes for the most part from the fact that these things really do happen during the rehearsal of a play. The audience just isn’t aware of it, unless everything falls apart. Which, in this case, it does!”

The cast of ‘Play On!’ features many veterans of the Brainerd Community Theatre stage, along with a few newcomers. Bri Keran plays Polly, the cast’s prima donna, with Marc Oliphant dutifully henpecked as Henry, her husband. Nick Kory is Billy, the leading man with an eye for his leading lady. Shane Keran plays Saul, the sardonic wit of the cast capable of getting under everyone’s skin. Beth Selinger is Aggie, the stage manager who must somehow bring order to the chaos. Jen Anderson is Gerry, the director of the whole shebang.

Newcomers to the BCT stage are Emili Lane, who plays the leading lady Violet, Michelle Waldoch as Smitty, the youngest member of the cast, and Clayton Castle as Louie, the technician. Capping the cast is newcomer Rebecca Timmins as Phyllis, the would-be bard responsible for the script that seemingly never stops changing.

The public should note that a strobe lighting effect is used in the play, and a gun is fired on stage.