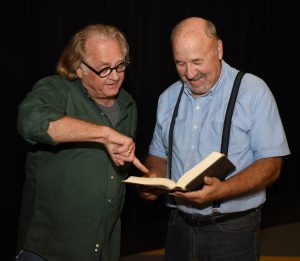 Meet Clarence Darrow. He’s a fiery lawyer who pioneered the way in defending causes like labor unions, civil rights, and the right for teachers to teach evolution in the classroom. Often considered one of the most famous lawyers and civil libertarians, he made a name for himself during the early 20th century.

And now Brainerd Community Theatre invites you to spend an evening with him in “Clarence Darrow”, a one-man production featuring Patrick Spradlin and directed by Erik Steen. It’s written by David W. Rintels and is based on the Irving Stone book “Clarence Darrow for the Defense.”

Spradlin and Steen are a dynamic team. The two have worked together on several productions, including “Art,” “The Woman in Black,” and most recently “Bill W. and Dr. Bob.” For ‘Clarence Darrow” they are focused on capturing the true spirit of the man who fought against many of the issues we’re still battling today. Issues like civil rights, labor and fair working conditions.

“One hundred years ago, he was talking about the gap between the rich and middle class long before Bernie Sanders,” Steen said.

He was a progressive thinker, fearless in taking up those causes. Of all his efforts, Darrow is perhaps best known for the Scopes Monkey Trial, which challenged the right of teachers to teach evolution in the schools. The trial pitted Darrow against William Jennings Bryan, a three-time Republican candidate for the presidency. Their clash was followed by the entire nation.

Come get to know Mr. Darrow through his humor and sharp eye for the law, and perhaps re-examine your way of thinking.

According to Steen, every play tells a story. Spradlin and Steen will tell the story of this incredible man’s life in a way that goes back to the very beginnings of theatre: a single storyteller on a stage without the flashy scenery and large supporting cast.

“There’s just something fascinating about an evening totally devoted to one character,” Spradlin said. “You get to know a lot about them from their perspective.”

Spradlin is the director of Brainerd Community Theatre. He has directed in college, community, and professional theatres in Illinois, Michigan and Minnesota. Before that role, he himself considered becoming a lawyer after years battling on his college debate team. With this production, Spradlin wants to bring Darrow back to the forefront after the attorney may have been fading from the memory of the public. He’ll do that through his meticulous work at capturing the right accent and body language of the historical figure. Spradlin sees a lot of himself in Darrow.

“I hate injustice. Even in small things like people cutting in line.”

Steen is both a seasoned actor and director. Previous productions under his direction have included “The Mousetrap”, “I Hate Hamlet” and “The Diary of Anne Frank” at CLC, and “Morning’s at Seven” and “Arsenic and Old Lace” at Pequot Lakes Community Theatre.

Previous CLC course certified for quality
Next Do your BrightStart Orientation and you could win!