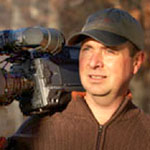 Mark Ambroz, an award-winning TV and video producer, has been hired as a full-time videography production instructor at CLC, a post he held temporarily the past two years. From 2001-2010 Mark was owner/president of One Guy Short Productions in Brainerd, and before that he held positions that included licensed steadicam operator at The Main Workshops, production and photography for Babe Winkelman, KARE-TV, and USA Today. He holds a bachelor’s degree from the University of Minnesota. Mark has more than 30 years of experience in video and TV production and has won film festival awards as well as 72 national awards in seven years for Babe Winkelman Productions.
Share