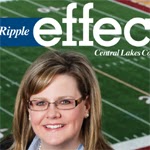 The Higher Education Marketing Report has awarded Central Lakes College four advertising awards in its 27th annual competition. Central Lakes College’s Marketing and Public Relations office earned two bronze and two merit awards. Bronzes were won for the Ripple Effect newsletter and the academic catalog. Merits were received for single magazine advertisement and direct mail with the “Dive In” campaign. The Educational Advertising Awards is the largest educational advertising awards
competition in the country. This year, over 2,900 entries were received from
more than one-thousand colleges, universities and secondary schools from all
fifty states and several foreign countries. Most of the entries were from universities and four-year colleges.
Share