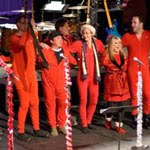 On Wednesday, Dec. 14 at 7:30 p.m. in the Chalberg Theatre on the Brainerd campus the Central Lakes College Cultural Arts Series presents Rock & Roll Xmas Spectacular, a Las Vegas-caliber, multi-media, full-production show that mixes an eight-piece band with music, comedy, parodies – even a game show. What would Christmas be without Led Zeppelin? Jethro Tull? AD/DC? It wouldn’t be Christmas without the Rock & Roll Xmas Spectacular. Join an all-star cast of musicians as they rock their way through timeless holiday classics and bring new takes on hit songs you didn’t even know were holiday classics. Rock out to traditional Christmas songs played in a non-traditional way, with a tribute to the great rock bands of the world. Come hear what audiences around the state are calling the greatest (rock Christmas show) on earth. Tickets range from $10-$25, according to section. Tickets are for assigned seats. For full ticket details and seating charts, go to each event’s page at http://www.clctickets.com/ The Theatre Box Office window is open one hour prior to show time for rush seats if the show isn’t sold out. CLC students are admitted for $10. For information, call (218) 855-8199 or email clctheatre@clcmn.edu
Share