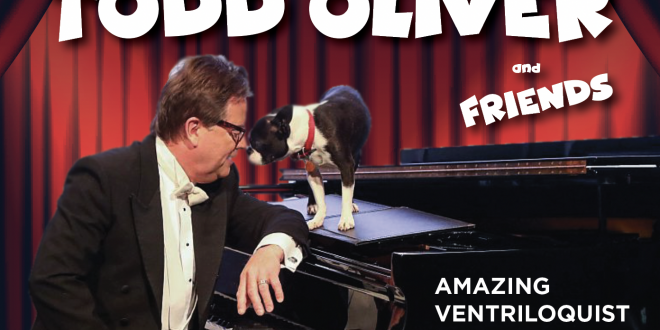 Have you ever met a talking dog, a real talking dog? Get ready, you’re going to meet the funniest comedian on 4 legs! “Irving,” with a little help from his friend, Todd Oliver, is going to talk up a storm when the nationally-acclaimed ventriloquist takes the John Chalberg stage on March 25. As part of the Central Lakes Community Performing Arts Center’s resumed spring season, Oliver’s 7 p.m. show is billed as a family friendly evening of comedy, music, and magic.

Center Director Patrick Spradlin called Oliver’s appearance a unique addition to the performing arts series season. “We’ve presented all kinds of talent on our stages, but nothing like this,” said Spradlin. “Oliver is world-class, as is Irving, his Boston Terrier companion. As an owner of Bostons, I’m really looking forward to hearing what that breed has to say.”

If you ever wondered how a dog looks at life, Irving is going to give it to you straight from the dog’s mouth. He won’t mince words, and if he does, it’s Todd’s fault anyway. He’s a ventriloquist!

Todd Oliver grew up loving dogs, ventriloquism, music and magic. As a young boy, he studied piano, guitar, voice, and the variety arts. Along the way, he created some wooden-headed characters and performed around the world. You’ll also meet a bunny named Alice and 3 beautiful birds.

Todd Oliver and Friends have been a feature on Late Show with David Letterman, The Tonight Show with Jay Leno, The Late, Late Show with Craig Ferguson, The Today Show, a couple episodes of Walker Texas Ranger, and in 2012, they were a top 4 finalist on America’s Got Talent. A major draw for many years on Showboats in Branson, MO and Nashville, TN. as well as other major entertainment venues. Todd is now touring and bringing his brand of clean family fun to towns across America.

Noted Spradlin, “Todd Oliver’s humor is situational and contemporary, and above all, clean and family friendly. It will be a night that makes you feel good and leaves you wondering, ‘How do those funny dogs talk?’”

Because of college and state COVID restrictions the audience size will be limited to 50% of the theatre’s capacity, which means fewer tickets than normal will be available. Masking is also required of all patrons attending the performance.

Tickets and information for Todd Oliver are available on the CLCPAC website, www.clcperformingarts.com and by phone at (218) 855-8199.

This production is made possible, in part, by the voters of Minnesota, through a grant from the Five Wings Arts Council, thanks to a legislative appropriation from the Arts and Cultural Heritage Fund.