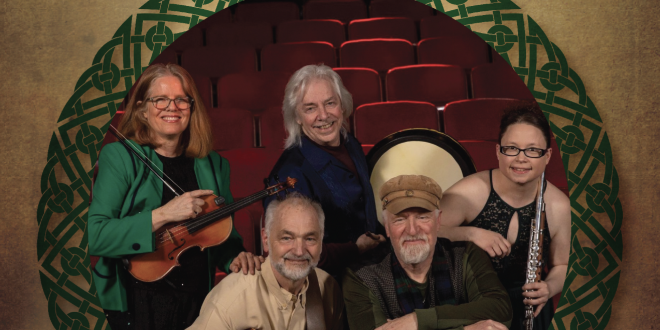 Irish Band and Dancers to Perform at CLC

The Central Lakes Community Performing Arts Center will resume its spring season of performances with the band Ring of Kerry on March 18. The 7 p.m. show will take place in the John Chalberg Theatre on the Brainerd campus of Central Lakes College.

The Center’s Director, Patrick Spradlin, described the band as ‘a high-energy audience engaging quintet that will give a jump start to our resumed season.’ CLCPAC’s spring season was put on hold due to the college’s and the state’s concerns over COVID numbers.

“We had to postpone our January concert to June, cancel our community theatre production, and move two other February concerts to the summer season,” noted Spradlin. “We’re still faced with operating at 50% capacity of our spaces and masking will be required of all patrons.”

Ring of Kerry takes its name from a beautiful craggy drive in southwestern County Kerry, Ireland. Its Celtic music, however, is played with a heart much closer to its American home. All five of its engaging musicians sing and play several instruments. From the thundering sound of the bodhran to the sparkle of the hammered dulcimer; from the lilt and rhythm of fiddle and guitar to the haunting wails of the flute and pennywhistles, the band has developed a blend that is animated, ruggedly beautiful and fun.

“We know that St. Patrick’s day is on the 17th, but that falls on a Thursday. If people really want to celebrate the holiday right, it’s better to do it on a Friday. No work the next day for most of us!”

The band will be joined on stage by the St. Paul Irish Dancers, who will perform authentic Irish jigs and reels in full costume as a part of the concert.

Accolades from other venues that have presented this show are superlative:

“Ring of Kerry wowed our audience with a one-of-a-kind, full-house energy that was as captivating as it was real.”

“Ring of Kerry and the St. Paul Irish Dancers; now THAT was a whole lot of energy!” — Garrison Keillor

The five members of the band include Paul Cotton, a percussionist who not only is a fantastic bodhran player, he is also able to incorporate a truly international feel to the music through his use of various drums from around the globe. Paul Imholte is known affectionately as “The Musical Stringman” for his ability to skillfully play the hammered dulcimer, guitar, mandolin, fiddle, viola, cello, banjo and probably several other instruments that have yet to be invented. Paul is also a singer, arranger and songwriter. Charlie Roth is great at telling a story with his rich baritone vocal, acoustic guitar, rack harmonica, and foot percussion. Emma Nistler is a singer, flute and penny whistle player who also plays several other instruments. continues to learn new In the early days of Ring of Kerry, she performed with the band as an Irish step dancer. Christina Seaborn is a fiddle player extraordinaire, an expert at jazz improvisation, and is steeped in Irish music. She has a degree from Berklee College of Music in Boston.

Tickets and information for Ring of Kerry are available from the CLCPAC website, www.clcperformingarts.com or by phone at (218) 855-8199.

The CLCPAC season is made possible, in part, by the voters of Minnesota, through an operating support grant from the Minnesota State Arts Board, thanks to a legislative appropriation from the Arts and Cultural Heritage Fund.