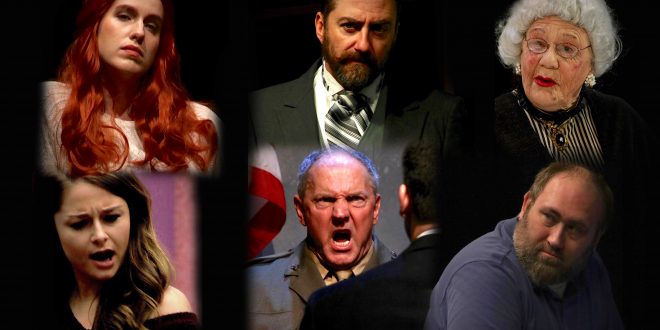 Jessie Perrine November 23, 2021 Performing Arts Comments Off on Back in the Limelight Retrospective I Salutes BCT Actors 524 Views

The spotlight is focused on the work of over 45 local actors in Retrospective I, a photographic exhibit by John Erickson, now on display in the lobby of the John Chalberg Theatre on the Brainerd campus of Central Lakes College. The featured actors appeared in 19 different productions staged by Brainerd Community Theater over the past five years.

BCT Director Patrick Spradlin described the project: “This is by no means an exhaustive chronicle of either all the productions we’ve staged or all of the actors who’ve appeared in the plays,” says Spradlin. “But it is a fascinating look at a veritable army of actors who have made theatre happen at BCT.”

Erickson, a retired attorney, has attended read-throughs, rehearsals, dress rehearsals, and performances of nearly every BCT production in the past five years. He takes literally hundreds of images of each production in process and forwards them to Spradlin. After Spradlin looks through the initial shots, he and Erickson agree on the photos that will make it onto the walls of the BCT theatre lobby for public viewing. “Each show has its own exhibition,” says Spradlin. “John also shoots our publicity photos and actor head shots for the playbills.”

It was while reviewing some of the past photos that have been displayed that Spradlin and Erickson arrived at the idea of Retrospective I. “We saw so much potential in pulling together the best of the best and making them part of a stand-alone exhibition. We wanted to pay special tribute to these remarkable individuals who bring such passion to the theatre. They deserve it.”

One other aspect of Retrospective I, says Spradlin, is the opportunity for viewers to reminisce about past BCT productions. “People will be able to say, ‘I saw that show,’ or ‘I’m sorry I missed that one.’”

Spradlin spoke recently with Erickson about the project and about the photographer’s vision and his approach to photographing actors at the very moment of their creative process.

Erickson: This very much depends on the actor and the actor’s experience, including experience being photographed, whether in rehearsal or performance. More care must be taken to be less intrusive when less experienced actors are involved, but generally speaking, regardless of the actor, it is important that both I and the camera pointed at the stage be somewhat familiar to the actor so that I become more background than an obvious presence.

Spradlin: What about your actual photographic technique?

Erickson: While I will change lenses on occasion, I prefer to use a telephoto lens for all but formal portraits, or highly crafted, posed images, or images of, for example, a “costume parade” where the actor is so engaged with the costumer that all else, such as the presence of a photographer, is lost upon the actor. The telephoto helps me to disappear into the darkness. And I never use flash.

Spradlin: What challenges do you face when photographing actors in their element?

Erickson: It varies with the stage of the production, there being much more freedom of movement for me, vis a vis the actors, earlier on in a production’s life span. I should not photograph a play performed to a live audience. Standing up and clicking a camera, even from a distance, is not to be done. The next best thing are full run dress rehearsals, and to photograph them well, it is preferable that I have a sense of the play and how it is being acted so as to anticipate critical moments and to position myself so as creatively to find that in my “brush,” the camera, from a creatively helpful perspective. Timing, it is rightly said, is everything. Lighting is so important. Harsh white lights, which are so helpful to a photographer, are not favored by actors or directors.

Spradlin: Many of the photos in the exhibit, perhaps the majority of them, seem to have a lot of shadow, darkness, negative space. Is that part of your approach, or something that just happens?

Spradlin: Any favorite moments you’ve captured that remain with you?

Erickson: There is theatre magic in every play, and when so many plays have been seen, from early production stages through the final bows, there are many, many, many “favorite moments.” And they are created by so many contributors to those moments, most of whom are never seen, such as the director over months of rehearsals and the stage hands who clear the set for the penultimate action. I will, however, provide two examples which I suspect mesmerized everyone who saw them performed: In Young Frankenstein, Rebecca Timmins sang a keening love song over a prostrate Frankenstein, who was so ably performed by Jesse Brutscher. Both the song and the acting of the part in the performance of the song could not fail to impact the soul of anyone present. And in A Few Good Men, an incredible drama which, as performed at Brainerd Community Theatre, included nothing but incandescent performances throughout the cast, the fury of actor Scott Lucas in delivering the coup de grace speech of Marine Colonel Nathan Jessup can never be forgotten.

The actors featured in Retrospective I come from all over the immediate area: Brainerd and Baxter, Little Falls, Pequot Lakes, Nisswa, East Gull Lake, Staples, Motley, Emily, Crosby and Deerwood. They are:

The plays that are represented in Retrospective I are:

Erickson detailed what he saw as the appeal this exhibit holds for not only the actors in it but also the public in general: “These images are what we hope are the best of the best, the end of a long line of edits, the survivors of the cutting room, which we hope will evoke the viewer’s wonder in the skills of these actors producing their art and its cultural and aesthetic effects on us, their audiences, just as actors have done for thousands of years. The actors deserve to be recognized for their considerable talents, and as we do that, in order that the shows go on, we implicitly honor all of those who stand behind the actors on stage to make great art for people who come to the BCT stages at CLC, and we also then better can value the importance to this community of having Central Lakes College here, among us, as a learning center and a cultural arts generator for now almost 75 years.”

Retrospective I is on display in the John Chalberg Theatre lobby on the Brainerd campus of Central Lakes College during the college’s business hours. It remains on display until December 1. The exhibit is free and open to the public. Those attending are required to wear face coverings while in the college buildings.