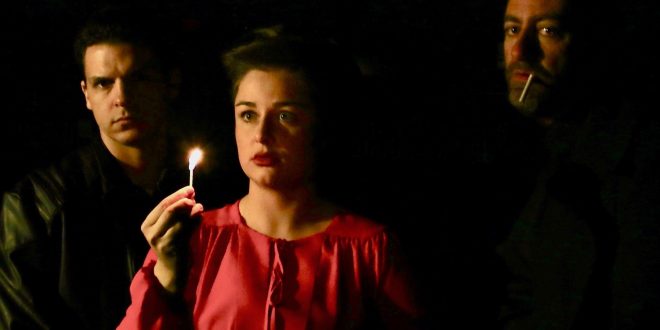 Brainerd Community Theatre debuts its 2021-22 season with the classic thriller ‘Wait Until Dark,’ performing on the John Chalberg stage on the Brainerd campus of Central Lakes College. The tension ratcheting play runs October 21-23 and 28-30, with all performances at 7 p.m.

Director Patrick Spradlin noted that this is the first of four plays that resulted from a unique form of casting utilized by BCT. “This year we used a company audition approach,” said Spradlin. “Basically, we held three audition sessions in early August and cast all four of our shows at once, putting together a company of over 50 local actors.” In some cases the same actors will appear in multiple productions during the season, said Spradlin.

“We used this casting approach for several reasons. Mainly, it allowed me and our two guest directors (Travis Chaput and Beth Selinger) to see a large pool of talent all at once. Then, we were able to distribute the actors among the four productions in our season. The actors liked it because it allowed them to better schedule their time commitments over the next several months.”

The first play up in the season will probably be familiar to many due to its film adaptation. “The play version of ‘Wait Until Dark’ was highly successful in itself, but the movie starring Audrey Hepburn and Alan Arkin really catapulted the story to fame,” Spradlin pointed out. “The version we’re producing is more recent adaptation of the Frederick Knott play by Minnesota playwright Jeffrey Hatcher. It has some interesting twists that don’t appear in Knott’s original script.”

The story begins by introducing us to Susan, a woman recently blinded in an automobile accident, and her photographer husband Sam. Their lives are upended when Sam is approached by a stranger who gives him a doll for temporary safekeeping. Unknown to Sam, the doll contains valuable contraband. When the woman, Lisa, who gave it to him returns to claim it, the doll can no longer be found. Lisa’s psychopathic partner decides to take matters into his own hands, enlisting the help of a con man to trick Susan into finding and surrendering the doll. A wartime buddy of Sam’s named Mike appears on the scene and works with Susan to unravel what is quickly becoming a mysterious and dangerous situation. However, Susan soon finds herself on her own, and must both overcome her blindness and use it to her advantage in order to survive the menacing psychopath intent on finding the doll.

The cast of ‘Wait Until Dark’ features actors who’ve become well-known and respected for their work in past productions. Susan is played by Maren Martin. Martin has delighted audiences with comic character portrayals in ‘Five Women Wearing the Same Dress’ and ‘Boeing, Boeing’ and for her dramatic turn as JoAnne Galloway in ‘A Few Good Men.’ The role of the menacing Mr. Roat is portrayed by Kevin Yeager, whose performances in productions such as ‘The Elephant Man,’ ‘The Woman in Black,’ and ‘Cat on a Hot Tin Roof’ have distinguished him as one of the finest actors in the area. Mike Talman is played by Nick Kory, recognized for his versatility in leading roles in ‘Young Frankenstein,’ ‘The Elephant Man,’ and ‘A Few Good Men.’

As husband Sam will be Brian Rett, newcomer to the BCT stage who returns to acting after a somewhat lengthy hiatus. Dave Endicott will play Carlino, a con man. Endicott was last seen on the BCT stage in the comedy ‘Dearly Departed.’ Also making her BCT debut will be 11-year-old Lily Cameron playing the role of upstairs neighbor girl Gloria. Macy Judd, last seen in the summer musical ‘Xanadu,’ will make a special appearance.

Director Patrick Spradlin sat down with members of the cast and with company manager/production stage manager Lorri Jager to get their opinions about the process of casting, the rehearsals of the play, and their particular challenges with the production.

Spradlin: This is the first Brainerd Community Theatre production coming out of the company auditions. What’s your thought on the company casting process?

Kory: Company casting was an exciting process. In my previous experience with BCT, each production felt largely like its own, isolated event. It was cast, rehearsed, produced, and then wrapped, without much consideration – on the part of the actors, at least – for which shows came before or would come after. By holding company casting, it brought a much larger group of potential actors together for auditions, and it solidified the idea that we are all in this together, even if we don’t all share shows with one another.

Jager: From a managing perspective it’s advantageous to know the basic shape of the season, be able to analyze/compare technical aspects of all four scripts at once, and only have to collect administrative paperwork from actors once for the year. I think actors also appreciate a heads-up about their time commitments–knowing which months of the calendar to block out for their production(s).

Yeager: When I first heard about the concept I was ecstatic, but in all honesty I had mixed opinions about how a “company audition” format would be received. Those concerns were extinguished the second I walked into the theatre and took witness to an overwhelming turn out including many faces I had not seen before. I am very proud to be a part of BCT history.

Martin: The company audition was a big event, I’ve never seen so many actors turn up for an audition. I think by auditioning for a company of actors for multiple shows CLC performing arts was able to cast a wider net and bring in people that might not have otherwise considered auditioning for each show individually.

Rett: Having only auditioned once before, I’ll admit to being extremely nervous to audition in front of people with a lot more experience than my own. But it was nice to know what to expect in terms of commitments for the season as well, so travel/vacations could be planned accordingly

Spradlin: What has been your greatest challenge in putting together this production?

Endicott: It’s been awhile since I have done a drama. I’ve done mostly musicals lately so it is a good challenge to be pushed in this way. I have a role that I’m still trying to figure out and looking forward to how this character develops up until show time.

Martin: My character Susan is a blind woman, so learning how to rely on senses other than sight has been so challenging. I have the luxury of still using my eyes on stage, but the challenge comes in being spatially aware without letting my eyes focus or track on objects. They show is also a very physical production with strong emotions at play, we engage in stage combat and the terror is palpable.

Kory: The hardest part for me has been figuring out how my character would act when the character I share the stage with the most is blind. How does that change the way my character would behave, the way they would speak or move, the things they would notice, or the way they think. Finding a way to display all of those small – yet important – factors on stage is what will bring the show to life, and it has been a fun challenge figuring it out.

Spradlin: The play is called a ‘thriller.’ What do you see as the thrilling aspects of the play?

Rett: The knowledge that we know something Susan doesn’t, and that we wish we could warn her!

Jager: Are you kidding? Is that a trick question? I’m not giving away details! But playwright Jeffrey Hatcher has definitely opted for sensationalized plot over detailed characterization and director Patrick Spradlin & Co. are definitely taking their cues from him.

Yeager: Even if you have seen the movie or another stage production, our portrayal of these dark events will certainly offer something new. If by chance you are unfamiliar with the story, buckle up, you’re in for a heck of a ride.

Martin: Darkness has a big role in the play. It adds to the suspense of the action and immerses the audience in how it must feel for Susan at all times.

Spradlin: What’s your ‘elevator’ pitch (short sales pitch) to people to convince them to come to see ‘Wait Until Dark’?

Rett: Fear. Anxiety. Bravery. Suspense. Disbelief. Come along with our protagonist, Susan, and experience all of these visceral emotions with us in our production.

Endicott: Come and see an intriguing thriller with suspense and drama. This is an excellent cast (present company excluded) that will keep you on the edge of your seat.

Kory: ‘Wait Until Dark’ is a gripping story that caters to audiences who enjoy mystery and suspense, and it definitely deserves a second watch to see what things you may have missed which hinted at or foreshadowed later events.

Jager: Recently I was asked, “Is the show you’re currently working on intense? Am I going to have to think? Or can I just come enjoy it?” I tell them it’s about a blind woman who, in the midst of being conned by thugs, uses her blindness to turn the tables on them. That seems to spark their interest, so I don’t usually mention the psychopath, blood, or fire.

Yeager: Simple: this is a hell of a show with an amazing cast, technical crew and leadership. The writing is superb and I am certain this show has the makings to be one of the highest quality productions in the area in the recent past.

Tickets for ‘Wait Until Dark’ are available from the CLC Theatre Box Office at (218) 855-8199, or one hour prior to each performance. They are also available online at www.clcperformingarts.com