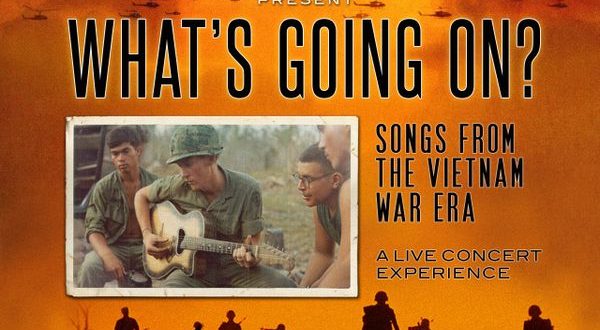 The Central Lakes Community Performing Arts Center debuts its 2021-22 Cultural Arts Series with The Fabulous Armadillos’ most acclaimed show, ‘What’s Going’ On: Songs from the Vietnam War Era.’ The concert 7 p.m. concert will take place on September 24 in the Gichi-ziibi Center for the Arts on the campus of Brainerd High School.

Series Producer Patrick Spradlin says this is his favorite show from the Armadillos. “The Armadillos are such an incredible force in the music community of Minnesota. They’ve produced many memorable shows—their Eagles tribute, the Woodstock show, the Motown revue, and so many theme shows. But this show I believe is their best, not only because of the music but for the context from which the music comes.”

The show, which began its run in October 2018, not only honors veterans and the music of the Vietnam War era, it encourages discussion and healing. “We’ve presented this show twice to sold-out audiences,” said Spradlin. “In both cases the audience was so moved by what they saw and heard.”

‘What’s Going’ On’ is a moving concert experience that incorporates live music, live narration and video to provide the audience a multi-media deep dive into the 60’s and early 70’s and of course, the Vietnam War. Through song and imagery this concert examines the tumultuous time period, but concludes on a note of hope and inspiration for a better tomorrow. As one Vietnam veteran narrates during the show, “When we think of our divisions today, they pale in comparison to how badly we were divided back then.”

“A big part of the show is thanking the veterans who never got that thank you when they got home the first time,” said Greg Armstrong, keyboardist and front man for the Fabulous Armadillos. “Some people have said it’s a healing experience. For others, it’s being able to reflect and talk with others about what the music or the experience was.”

Armstrong said the show began when retired Army Maj. John Donovan approached him about the Fabulous Armadillos performing a few songs from the Vietnam War era.

“I said, let’s do a whole show based on this and make it part of our series,” Armstrong said. “The show was born from that.”

Having the voices of veterans in the show adds depth to an already emotional and moving show. Armstrong described performing ‘Gimme Shelter’ by The Rolling Stones, which the Fabulous Armadillos have performed numerous times over the years.

“It’s a powerful song but when it’s in this setting with the vets telling their stories that pertain to it, it gains power times 100%,” Armstrong said. “Your hair stands up on your arms when you’re playing this song.”

What attendees have said about the show: “This show is definitely a must see!! Music and presentation are spot on!! The best of the Dillo’s shows!”

“So much emotion tonight! This was far and away the best Armadillos show ever. The stories told by the veterans and the images that went with the music were just phenomenal. Thanks for the great music, as always!”

Tickets for The Fabulous Armadillos are on sale on the CLCPAC website, www.clcperformingarts.com, or by calling the box office at (218) 855-8255. Patrons are encouraged to check the website for the latest COVID-related protocols that will be in effect for the performance.

The show is supported in part by a generous donation from the Disabled American Vets and the Veterans of Foreign Wars. The entire season is made possible in part by an operating support grant from the Minnesota State Arts Board, part of a legislative appropriation from the arts and cultural heritage fund