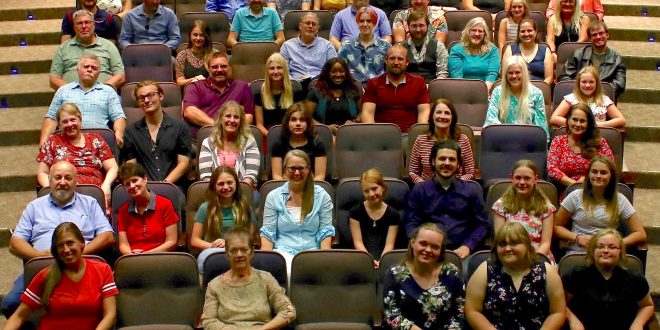 Group photo credit: John Erickson Note: This photo was taken before the mask mandate was put in place.

BCT Director Patrick Spradlin called it a truly impressive collection of talent. “We held our first-ever company auditions at the end of August,” he noted. “Our goal was to cast all four shows in our season at one time.”

Spradlin said there were several advantages to this approach. “It allowed our directors to see a large pool of talent at one time, so we were able to place actors in the respective shows in a more efficient manner. The actors are now clear on their commitments to a production’s schedule and can get a head start in things like memorization. Our designers are able to work in advance, especially with the later shows. It made the audition process more like a gathering of theatre lovers with a common interest rather than a competition.”

Seventy-four actors auditioned for the available roles in four productions. “As a director, it’s always difficult to tell someone we’re unable to use their talents on stage,” said Spradlin. “I always ask those I cannot cast if they are interested in being part of the productions in a support capacity, such as scenery construction, backstage crew, or other important functions. More often than not I get a ‘yes’ response.”

The BCT company hails from towns throughout the area. “We have members from Brainerd and Baxter, of course, but we also have several from Little Falls, Crosby, Pillage, Staples, Crosslake, Jenkins, Pine River, Nisswa, Fort Ripley, Breezy Point, Merrifield, Buffalo, and Minneapolis,” said Spradlin.

“This is an ambitious season,” said Spradlin, “and I know we have a terrific collection of talent, both on stage and behind the scenes. I know our community of theatre-goers will be truly impressed by what they experience this season.”

Information on the shows of the BCT season, ticketing, and COVID protocols is available on the Central Lakes Community Performing Art Center website: www.clcperformingarts.com