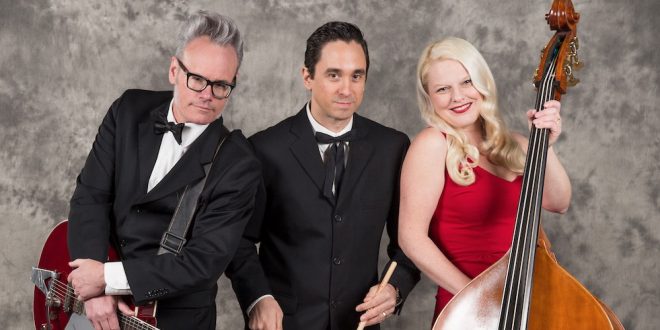 The Holy Rocka Rollaz return to Brainerd with their high energy show on Saturday, September 19 on the south lawn of Central Lakes College. The 2 pm show is part of the Central Lakes Community Performing Arts Center’s Fall Outdoor Concert Series.

“We love this band,” said Patrick Spradlin, director of the Center, “and so do our audiences. Here’s a band that takes punk and rockabilly and slams them together make a high-energy style of 50’s rock.”

Spradlin notes that this is not an ‘oldies’ band. “While they play the classic early rock ‘n’ roll and rockabilly of Elvis Presley, Buddy Holly, Chuck Berry, Johnny Cash, and many more, they give it their own take on it.”

The Holy Rocka Rollaz began as part of a prison ministry band put together by founder Mark Flora. He toured correctional facilities in the Dakotas, bringing high-charged music and messages of hope to the inmates. The Minnesota band gained a following throughout the region as a high-octane act that has been seen in numerous venues throughout the Midwest. They were part of an all-star lineup at the annual Winter Dance Party held at the iconic Surf Ballroom, site of Buddy Holly’s last concert. Other name performers at the Dance Party included Frankie Avalon, Lou Christie, Bill Haley Jr. & The Comets, The Crystals, and Brian Hyland.

Using vintage instruments and having spent years studying the styles of all the early rock ‘n’ rollers, this band knows how to deliver the spirit and sound of those pioneers. Lead singer/guitarist Mark Flora plays a hollow body Gretsch through tube amps, bassist/singer Lisa Lynn slaps a mean upright bass and drummer/singer Matt Alexander pounds an old Gretsch drum kit. The band feels no need to update or modernize the classic sound of early American rock ‘n’ roll. “It’s perfect just the way it is. And people are really reacting to it!” said Flora. “The looks we see on people’s faces when we really let it rip is priceless! They’re not used to seeing what we do, but they sure do like it! Our favorite comments from older folks are…’I haven’t heard music done like this since the 50s!’

“This band brings nothing but smiles to everyone who sees them,” said Spradlin. “We’re fortunate in these difficult times to be able to host them here.”

The concert will be held on the south lawn of the Brainerd campus of Central Lakes College. This will mark the fifth event held at this site since July, with two more outdoor concerts scheduled for October. Information on tickets is available from the CLCPAC website at www.clcperformingarts.com