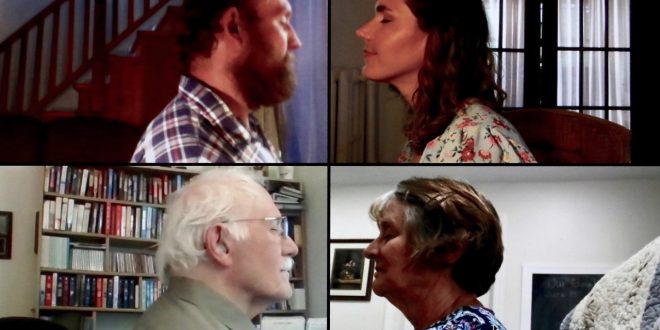 Even though current health directives don’t allow for an audience of more than 10 to gather in one place, Brainerd Community Theatre (BCT) anticipates a large turn-out for its next production. That’s because it will be performed entirely online, with spectators watching via computers, smart TV’s, and cell phones. Performances will take place on June 16, 17 and 18.

‘A Long Trip’ by Dan McGeehan is the story of an elderly couple who have lived a long and happy life together. Now, however, the woman is slowly slipping away as dementia runs its course. In an attempt to reawaken the bond they have held for so many years, the man tells her of the moment they fell in love. It is a story so vivid that she can see it play out before her eyes: a younger version of the man and woman meeting, falling in love and sharing a first kiss. One final, happy memory for her to take with her on her last long trip. Told with both laughter and tears, ‘A Long Trip’ is a journey of lasting love and interdependence.

BCT Director Patrick Spradlin spoke of the decision to stage a play in this format. “When the Covid-19 emergency first hit, our organization had long discussions about how to proceed,” he said. “It was never a matter of whether to proceed, only how we should do that.”

The theatre saw three possible scenarios: performers and audience members all separated from one another; performers on stage with their work streamed to a separated audience; audience and performers together in the same space, with some restrictions.

“This production fits the first scenario,” said Spradlin. “I approached director Beth Selinger, who has done some really fine work in various community theatres in this area, and gave her the challenge of making this idea real.”

The play is free to audiences, but the theatre is accepting donations of any amount from those who watch. “There are real costs to doing this, even in this format, and we know we won’t necessarily recoup all of those expenses,” said Spradlin. “But we are nonetheless committed to producing quality performing arts events.”

Selinger held virtual auditions over Zoom, cast the four actors needed for the play, and has been rehearsing them over the same virtual platform. “The biggest advantage to using this means of production has been the ability to cast actors who don’t even live in the area,” said Spradlin.

The cast includes veteran performers Ed Yunker, who got his start on the Chalberg stage in 1972 and most recently is known as the producer of the Geritol Frolics; Karen Mowers, who has appeared in numerous productions with Little Falls’ Hole in the Day Players; Sadie Wunder, who starred in various community productions before recently relocating to St. Paul; and Jesse Brutscher, known to area audiences for roles in each community theatre in the area.

“Sadie and Karen don’t live in Brainerd, but the internet still makes it possible for them to be involved,” said Spradlin. “This has certainly widened our potential talent pool.”

Spradlin sat down, virtually, with director Beth Selinger to get her perspective on how the production has been proceeding.

Spradlin: What have been the biggest challenges in directing actors in a virtual environment?

Selinger: I believe actors by nature are drawn to being close and very interactive with their fellow actors. As a production evolves and character work is being developed, actors use their entire beings to breathe life into their characters and strive to not only embrace their own character but to integrate themselves into the lives of the other characters as well.

Not having the advantage of physically being together and not being able to read body language, relate to movement on stage and having very limited spatial awareness presents new challenges.

Spradlin: Has anything happened during the process that led to more creative choices or outcomes?

Selinger: In trying to give more depth to this type of production, we have come to rely heavily on the technical enhancements of the show. In working with the actors, they have also needed to become very aware of what environmental aspects help make the piece more interesting. The actors are also having to become their own technicians. Because of the priority to keep everyone safe in their own homes we have asked them to help create their own lighting and sound needs. With input from our incredible technical team (all of whom are also working remotely) we are working hard to bring the view from the screen to life.

Spradlin: How have your actors responded to working in this environment?

Selinger: The actors have been amazing with not only their character creativity but their willingness to navigate this new and unusual way of presenting theater. For example, trying to “kiss” someone that appears only in a box somewhere on a screen in front of you and gauging approximately where to place your face on your side of the screen to make that kiss look as real as possible has been one of the many interesting challenges the actors have worked with. These actors have been incredibly patient, responsive and excited as we navigate through all the nuances of virtual theater.

Spradlin: What should audiences expect when they view this production? What is similar to attending in a theatre? What is different?

Selinger: We wanted to make this experience as “theatrically” familiar to the actors as well as our audience. We have incorporated some of the traditional aspects that our theater audiences have come to recognize within the production. What the audience will recognize is a quality performance. Obviously, not having the audience be present to respond to the experience will be different for actors as well as audience. We hope that the audience will get caught up with the production as a whole and be able to still enjoy this new way of being entertained.

Spradlin: How does the story of the play fit into this format?

Selinger: The theme of this play will already resonate with a great many of our viewers. We also took our current set of circumstances we are living with and brought it into the story as well. So many of us are distant from our loved ones right now and only have technology to keep us connected. While most are thankful that we have these options, it is not without its limitations and sadness that for now, this is our best option. We didn’t want to ignore that piece of our lives and let it be known we are all striving to make the best of what we have.

Spradlin: Anything else you’d like the audience to know in advance of the production?

Selinger: We hope for just a moment in time, we can temporarily turn our minds to something beyond the news stories. To feed ourselves with something other than the constant barrage that we are all facing currently. To remember above all, somewhere, some time in our lives there was and continues to be love. Let us never forget.

“We hope we’re soon able to get everyone back together in our theatre spaces,” said Spradlin, but in the meantime we welcome everyone to be part of this unique event.”