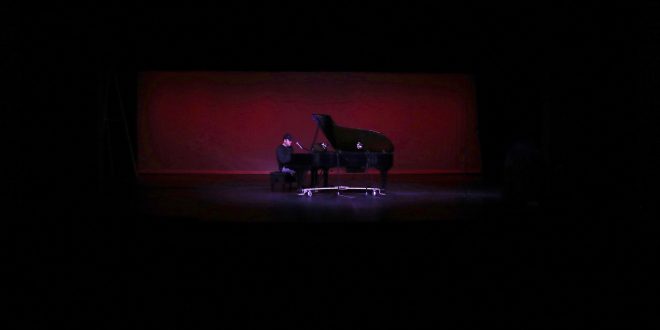 A piano. A performer. Lights, microphones. And absolutely no one sitting in the auditorium. Yet, the show went on, live streamed to a stay-at-home audience who clapped with emojis, offered song suggestions via a chat box, and responded enthusiastically to the 90-minute show. This was the event on May 8 that kicked off the Central Lakes Community Performing Arts Center’s (CLCPAC) plan to keep live arts programming alive, even in the current environment of social distancing and shelter in place.

CLCPAC Director Patrick Spradlin called the event a success, albeit with some caveats. “We had some early technical glitches that we eventually got ironed out,” said Spradlin. “And we had no idea whether anyone would be watching. As it turned out, we drew a pretty good crowd.”

Streaming live on Central Lakes College’s YouTube channel, audience counter showed just under 200 views during the event. “Assuming that not everyone was watching alone, you could probably add another 100 to that figure,” said Spradlin. “We streamed from the Chalberg, and if the audience had been in the space it would have been an overflow crowd.”

CLCPAC brought Ted Manderfeld to the empty theatre as their first offering in this new environment. Manderfeld is well-known to area audiences as one-half of Deuces Wild Dueling Pianos, and as the front man for the Rock n Roll Christmas Spectacular.

“We chose Ted because we knew our audience immediately recognizes his name,” explained Spradlin. “And, we knew Ted to be a terrific entertainer, and someone who could connect with the audience even if they weren’t directly in front of him.”

‘QuaranTinED’ was structured to be an interactive event, using YouTube’s chat box function and the CLC Theatre Box Office email account to connect with an audience kept home. “I monitored the chat box and the emails, and even texts on my phone, all during the event,” said Spradlin. “I was able to pass on song requests, comments, questions, and shout-outs during the show. We heard from people from the area, as well as from places like Seattle, Nashville, and Brooklyn.” Since Friday, a recording of the event has remained on YouTube, and has had over 1,000 views to date.

The event was offered free of charge. Audience members were asked to make a donation to the Central Lakes College Student Support Fund. “By the end of the evening we’d had over $2000 in donations online, with more to come via the mail,” said Spradlin.

‘QuaranTinED’ was the first in a series of events being planned by CLCPAC. “We are looking at doing more livestream music events,” said Spradlin. “But we’re also gearing up to present theatre productions in various formats.”

To meet these three possible scenarios, CLCPAC’s Brainerd Community Theatre will present a fully Zoom-ed performance of a play. They will also bring a small group of actors together onto a set and stream the live performance of the play to a virtual audience. And there is a plan to present two musicals outdoors, having the audience observe social distancing protocols while enjoying the plays.

“If we’re to survive in an uncertain world where we just don’t know whether we can ever get an audience together with our performers, we have to try all these ways,” said Spradlin. “The only alternative is to stop producing, and that’s not an alternative we accept.”

Details about upcoming events are still being finalized. Spradlin noted that current patrons of CLCPAC and Brainerd Community Theatre will receive email updates as information becomes available. He suggested that non-patrons become patrons by contacting the box office (clcperformingarts@clcmn.edu) and being added to the patron list. “We have an exclusive email system,” said Spradlin. “No spam, no solicitations, just information and updates from us. It’s the best way to keep informed about what we’re doing.”

Spradlin also noted that CLCPAC will be offering their patrons several pre-recorded performances from various professional groups. “One of the agencies we work with, BiCoastal Entertainment, has given us access to private recordings of performances by Lee Rocker, One Night in Memphis, a Moody Blues tribute show, and Catapult, a company of shadow/illusion performers who’ve appeared on America’s Got Talent.”

The events outlined by CLCPAC will begin in early June and extend through early August. “We are really looking forward to the day when we can greet everyone in our audience face-to-face,” said Spradlin. “In the meantime, we’ll do our best to make everyone feel welcome and involved in this new world.”

Previous 2020 Awards Day winners
Next CLC Connection: The Class of 2020 will never be forgotten