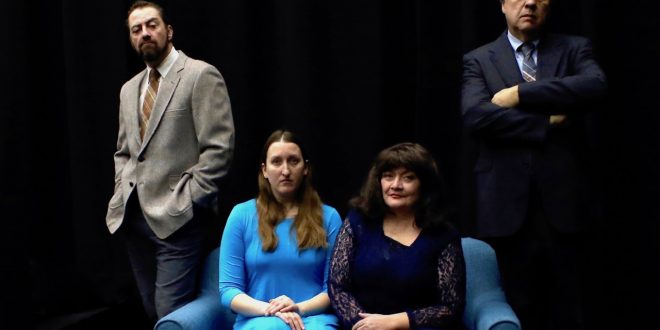 One of the most celebrated, critically-acclaimed, and controversial plays in American theatre history will debut the spring season for Brainerd Community Theatre. Edward Albee’s ‘Who’s Afraid of Virginia Woolf?’ will hit the Chalberg Theatre stage with performances February 20-22 and 27-28 at 7 p.m., and end February 29 with a 2 p.m. matinee.

With a title inspired by graffiti Albee saw scrawled on a New York bar’s restroom mirror, ‘Virginia Woolf’ is a classic of contemporary drama. The play takes place on one late night at the home of Martha and George, a couple who’ve been married for years and who have each swallowed much resentment, disappointment, and pain. On this particular evening a young couple, new to the college community where George is a professor and Martha is daughter to the university president, drop by for a short, polite visit.

What transpires is an evening of raw truth-telling, attempts at illusion and deceit, and a final reckoning for both couples that leaves them all fundamentally changed.

When it debuted on Broadway in 1962, Newsweek called it ‘a brilliantly original work of art—an excoriating theatrical experience, surging with shocks of recognition and dramatic fire.’ The Village Voice proclaimed it to be ‘…a crucial event in the birth of a contemporary American theatre.’ And the New York Times said ‘it towers over the common run of contemporary plays.’

The 2005 Broadway revival was reviewed in this way from the Times: ‘While ‘Virginia Woolf’ may be the most vicious portrait of a marriage this side of Strindberg, it is also—deeply and truly—a love story.’ The New York Post wrote at the time, ‘Scorching and exhilarating…this great play seems to have deepened over the years.’

Many will be familiar with the 1966 film version of the play, starring real-life husband and wife Richard Burton and Elizabeth Taylor, and featuring Sandy Dennis and George Segal. The black and white classic of the cinema earned Best Actor and Actress nominations for all four cast members, with Taylor and Dennis winning in their respective categories.

Brainerd Community Theatre director Patrick Spradlin plays the role of George in this upcoming version. “Any actor I’ve ever had a serious conversation with has wanted a chance at this part,” said Spradlin. “This is more than a vanity project for me. I believe this play to be one of the greatest pieces of dramatic literature in our history. It’s a play that needs to be produced.”

The production is directed by Michael Sander, veteran of numerous area productions. His most recent work has included ‘The King and I’ at Pequot Lakes Community Theatre and ‘Five Women Wearing the Same Dress’ at Brainerd Community Theatre.

Laura Busch portrays Martha. A Brainerd native, Busch studied acting at the prestigious Julliard School. She has been seen in several local productions, most notably and recently as Amanda in ‘The Glass Menagerie’ at BCT.

Kevin Yeager portrays Nick, the newly hired teacher of science. Yeager’s stage work includes the tour-de-force performance of the title characters in ‘Dr. Jekyll and Mr. Hyde’ at Stage North Theatre, and Treves in ‘The Elephant Man’ at BCT.

Brainerd High School drama director Karla Johnson portrays Honey, wife of Nick, who is desperate to fit into the social circles of the college town to which she has just moved. Johnson has appeared in leading roles in ‘The King and I’ at Pequot Lakes Community Theatre and more recently as Anne Deevers in the BCT production of ‘All My Sons.’

Producer/actor Spradlin sat down with his director and fellow cast members for a conversation about the play, and the rehearsal process.

Spradlin: What attracted you to this play?

Sander: Who’s Afraid of Virginia Woolf? is one of the great American plays. It was a groundbreaking experience when it was first produced. So who wouldn’t want to direct it? It offers challenging, meaty roles for all of the actors, and the opportunity for a director to work closely with all of them in developing their characters.

Johnson: I loved watching black and white films as a child, so I would watch the film version of Who’s Afraid of Virginia Woolf. I found the characters and the dialogue fascinating, so when I heard that CLC was putting on the play, I was thrilled to audition for the chance to play Honey.

Busch: Classic plays are always on my bucket list.

Yeager: The challenge. In both fiction and real life I am drawn to highly complex people whom on a daily basis must wage war against what life has brought them, and even more so against the life they have created for themselves. This play created by the brilliant Edward Albee is such a spectacle. Every character in this drama is literally in a fight for their life and I find it incredibly challenging to tell their story with true believably.

Spradlin: Briefly describe your character. How does the role fit your own persona?

Johnson: Honey is an extremely timid and passive character. She is referred to as a “mousy type” in the play. The role does not fit in with my own persona, which has been difficult for me as an actress to present Honey.  I have tried working on posture to present Honey. Instead of sitting up straight in a couch, like I would normally do, I try and slouch my shoulders a little and turn in my feet, to present a more passive pose.

Busch: To me, Martha is a frustrated woman with regrets in her life that, in her mind, she can no longer rectify.  I’ve also had many challenges in my life (as we all have) that I hope to overcome.

Yeager:  I play Nick, a young man with ambitions of power, wealth and ultimately validation by way of accomplishment. Nick is also a highly complex character maintaining a marriage that has taken advantage of his underlying virtue of loyalty. When portraying a character, I try to extract substitution from my real life, that’s how I render authentic motivation into my characters. It seems I have been blessed, or cursed, with a life I have always been able to draw from.

Spradlin: What have been the biggest challenges so far in rehearsing the play?

Sander: The play, although it is filled with startling confrontations and sometimes shocking revelations, is largely conversational, so the biggest challenge for the director is to find actions that will suit the moments and the characters. Otherwise, you could end up with all four actors spending the evening sitting around and talking, which would not be interesting for them or for the audience. Fortunately, this cast is filled with vibrant actors who never let the ball drop.

Johnson: I have tried working on posture to present Honey. Instead of sitting up straight in a couch, like I would normally do, I try and slouch my shoulders a little and turn in my feet, to present a more passive pose.

Busch: Bringing my own experiences to the role to make her most believable.

Yeager: Tight blocking, I like to find my movement organically through the rehearsal process. In this case the blocking was tightly predetermined forcing my mind to work in reverse, instead of movement responding to my characters mental state naturally, I am being forced to create the mental state to fit the blocking.

Spradlin: Anything surprise you about the play once you started playing it?

Sander: I wouldn’t say that it surprised me, but, although this is a serious drama, it is also frequently very funny, so the audience must be prepared to laugh when the script and action warrant that.

Busch: The language of the play is more difficult for me in vocal execution than it was when simply reading it.

Yeager: Every night I am finding nuance, and complexity in characters that I hadn’t previously seen.

Spradlin: What would you tell someone considering attending the play?

Sander: Anyone considering attendance should know that the play looks very deeply at two very different marital relationships. There is also the question of language, and the use of some words that make it absolutely unsuitable for children. But none of that should keep anyone away. This is a unique opportunity to see a play that was shocking and controversial in 1963, when it was first produced, but which led the way to much of contemporary theatre. Virginia Woolf opened the door to an era of brutal honesty and realism in depicting characters and relationships onstage. It was a landmark theatrical event, and should be on every theatregoers agenda.

Johnson: The actors who play Martha, George, and Nick are remarkably talented, and if anyone wants to see professional actors onstage, they should come and see this production! It is extremely intense, so I would recommend mature audience members attend. I am extremely grateful to be involved in this production with three incredibly talented actors, a phenomenal director, and a terrific stage manager.

Busch: It can be loud and violent; also a longer- than- average play (3 acts).

Yeager: Better eat your Wheaties. This isn’t a play for someone who wants to “be entertained”. This is a gritty 3 hour slug fest played in real time by highly dysfunctional people with multi faceted motivation and years of deceitful living. I would like to mention my appreciation to Brainerd Community Theatre for continually showing the courage and willingness to step out of the happy box and tell real life stories about real life people.

The set for the play is designed by Tim Leagjeld. Costuming is by Sharon Hartley, and lighting is designed by Heidi Eckwall. Lorri Jager is the production stage manager, and George Marsolek is the technical director. Photography is by John Erickson of Art Matters Studio and Gallery.

Tickets for ‘Who’s Afraid of Virginia Woolf?’ are available from the CLC Theatre Box office at (218) 855-8199 or online at www.clcperformingarts.com

The production is sponsored by Jennifer, Isaak, and Olivia Anderson. The entire season of BCT productions is made possible by an Operating Support Grant from the Minnesota State Arts Board, as part of an appropriation through the Legacy Amendment.