Home / Performing Arts / A Play for Our Times: Arthur Miller’s ‘All My Sons’ at BCT 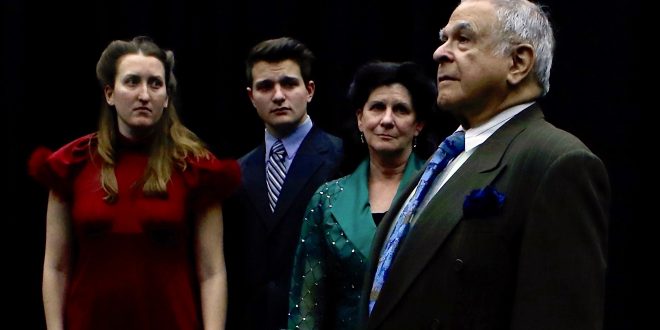 A Play for Our Times: Arthur Miller’s ‘All My Sons’ at BCT

Jessie Perrine November 18, 2019 Performing Arts Comments Off on A Play for Our Times: Arthur Miller’s ‘All My Sons’ at BCT 2,285 Views

A classic of the American theatre, a play which set into motion the career of one of the most important playwrights of the 20th Century, a modern version of classical Greek tragedy. These are each a description of ‘All My Sons,’ written by Arthur Miller, and which will be the Brainerd Community Theatre’s next production. Performances are December 5-7 and 12-13 at 7:30 p.m., and December 14 at 2 p.m. All shows are in the Chalberg Theatre on the Brainerd campus of Central Lakes College.

Miller had suffered a humiliating failure when his first Broadway offering, ‘The Man Who Had All the Luck,’ closed after only four performances. He set about writing a second play, with the vow that if it also failed he would seek a line of work other than writing for the stage. When his then mother-in-law pointed out a story in the newspaper about how a military contractor had produced defective engines for WWII military aircraft, Miller had his play. The result, ‘All My Sons,’ ran for 328 performances and won the Drama Critics’ Circle Award and earned Miller a Tony for Best Author. It also revived his career.

The play’s director, Patrick Spradlin, pointed to themes and ideas in the play that he believes hold currency for contemporary audiences. “We’ve seen war profiteering during the Iraq/Afghanistan wars,” said Spradlin, “so the basic plot line of this play still holds true. When you also take into account the Boeing 737 MAX scandal, where defective planes were literally falling out of the sky, I think audiences will find other connections.”

Spradlin was also drawn to the play for the way it poses questions of morality. “The character of Chris Keller, decorated veteran of the war, holds very dear the ideals of serving this nation. To him, it’s altruistic, it’s second nature, it’s the pinnacle of what it means to be a citizen. It’s all the more jarring to Chris when he discovers during the play that there are those near and dear to him who see expediency and personal gain as reason to ignore their duty to country and to allies.”

In ‘All My Sons’ we meet the Keller family: Joe, the patriarch, who owns and operates a factory that produced aircraft engine parts for use in fighter planes in WWII. His wife, Kate, is struggling to keep alive the memory of son Larry, missing and presumed dead by everyone but Kate. Chris, surviving son and veteran of many battles in the war, has returned home only to be disillusioned at the type of society that sees a war as little more than ‘a bus accident.’

Ann Deever was Larry’s fiancée, now romantically attached to Chris, and ready to move on with life by marrying him. Her father was Joe’s business partner, now serving time in prison for covering up the defects in the engine parts that eventually led to the deaths of 21 pilots. Joe has been exonerated, but perhaps there is more to the story, especially when Ann’s brother George arrives after visiting their incarcerated father with a different take on what happened on the day the faulty parts were shipped out.

“The play has a lot of humor in it, but at its core it’s a story of how we all struggle to maintain relationships even in the presence of secrets, lies, and rationalizations,” said Spradlin. “In greater or lesser degrees, each audience member will find a point of connection to their own experiences.”

Spradlin sat down with some of the cast and asked them about their experiences thusfar with the production.

Spradlin: What attracted you to audition for ‘All My Sons?’

Yeager: For me the answer is simple, the work of Arthur Miller. I have always been a huge fan of this type of storytelling. He is a master of creating common characters of seemingly good intent driven to unspeakable acts by the faults within all of us.

Timmins: I was very attracted to this role and production because of its universal themes of family love, grief, denial and secrets.  I’ve been waiting for a role like this to challenge my acting skills beyond comedy.

Chaput: My background in theater is rich in musicals and comedies. I wanted to stretch myself and take on a more dramatic role with this show. I have been fortunate enough to be given this opportunity and I won’t be wasting it!

Spradlin: How would you describe your character as it relates to the play?

Bernard: Miller wrote a number of plays that expressed the tragedy of the common man. The most famous is ‘Death of a Salesman,’ but Joe Keller is a common man caught up in circumstances–partly of his own making–that cause his downfall.

Erickson: My character is a very down to earth guy. He knows what he wants and is very to the point. He also lives his family, and wants to do the right thing, no matter what it is. He gained these values from fighting in WWII.

Chaput: George is the catalyst of this whole show. Even though he only appears in Act 2, his presence is everlasting. He shows up, and turns the world upside down with the information he has to share. Without giving too much away, I think people will like what he brings to the table.

Timmins: Kate, as a mother, wife and neighbor is beloved, but her enduring belief that her son did not die in the war, but is living elsewhere in the world is becoming intolerable in a family that has long protected her from grief.  Kate has long dictated the tenor of the conversation in this family, but is quickly losing control as the past hurtles itself back into the middle of this family and neighborhood.

Spradlin: What challenges have you discovered in preparing for the play?

Bernard: Playing many of these scenes takes a heavy emotional toll. During rehearsals, I can’t help being affected by the emotional life I have to live, and it is physically and mentally exhausting, but also a rich experience considering the quality and depth of the writing.

Erickson: Other than having a very busy life this time of year, and trying to balance everything I have in my plate, the biggest challenge I have for this character is channeling all his emotions during the course of the show, because he changes emotions many times during the plot.

Spradlin: What would you say to anyone considering attending a performance of ‘All My Sons?’

Bernard: Anyone considering whether to attend should be prepared for a frequently shocking portrayal of a family’s breakdown. The beginning of the play is deceptively lighthearted, but things become darker and more complex as the play progresses. This is serious stuff.

Timmins: Come to this play with an open mind about how some good people fail to live up to standard of doing the right thing.  Take away what you learn, and examine your own lives.

Chaput: Do it. This isn’t going to be one you want to miss. Patrick has put together an all-star cast for this show. The people on stage are working their butts off to make sure this show and its message are heard for years to come.  Get your tickets early, because once the word of mouth gets out about this one, you will be sorry you didn’t secure your seat!

Tickets for ‘All My Sons’ are available through the CLC Theatre Box Office at (218) 855-8199 or online at www.clcperformingarts.com The show is sponsored by the LaVonne Danzl Family. The entire season is made possible in part by a Minnesota State Arts Board Operating Support Grant, thanks to a legislative appropriation from the Arts and Cultural Heritage Fund.