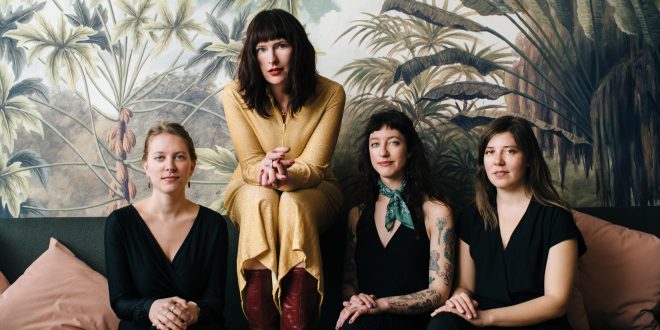 Fueled by a lifetime of love, loss and leaving it all behind, Minneapolis singer/songwriter Rachel Ries brings her music group called Her Crooked Heart to Brainerd on November 7. The show debuts the Dryden Theatre Cabaret Series of events, a subset of the Central Lakes Community Performing Arts Center’s Cultural Arts Series. The show will begin at 7:30 p.m. on the Brainerd campus of Central Lakes College.

Her Crooked Heart is the culmination of a journey Ries experienced and survived. In 2013, after two and a half years of marriage, Ries found herself touring a record around the world, accompanied by a stack of divorce papers in a pocket of her suitcase. She had left her marriage and a good man in New York City and leapt into the untethered unknown. What transpired was in turns euphoria and despondence; old lessons learned in new ways.

The tangible result was an album, ‘To Love To Leave To Live.’ Ries, the writer, multi-instrumentalist and producer behind Her Crooked Heart, demonstrates immense vulnerability and multifaceted musical craftsmanship in delivering personal and profound musical soliloquies on love, leaving and the life that follows after burning it all down. Her Crooked Heart presents a debut record unique in form, made up of cyclical narratives and intertwining histories, each informing the next. The result is a transformative song cycle, led by a charismatic personality, wholly indifferent to expectations of genre and instrumentation.

To bring these songs and this record to the stage, Ries has enlisted a powerful group of women; women who can, in their way, take on the feminine, humanist mantle of Her Crooked Heart and make it their own: Siri Undlin (Humbird), Adelyn Strei (Adro), Hilary James (We are the Willows, Bathtub Cig). The quartet blends classical and electric guitar; piano and vintage synths; cello, woodwinds and drum triggers. This merging of acoustic and synthetic sounds is all in service of the voice: four-part vocal harmonies that shift from ethereal to an elemental wail, always telling a story of transformation.

“I’m really pleased to bring Rachel and her group to the community,” said Series producer Patrick Spradlin. “They are traveling under a Minnesota State Arts Board Tour Grant, which means they’ll be in residence in Brainerd for the entire week prior to the show. They’ll be conducting outreach activities in local schools, the Center, long-term care facilities, and on our campus. Their impact will be much more lasting than a single concert.”

Spradlin also noted the beginnings of the Dryden Cabaret series. “We recently remodeled the Dryden Theatre, with an eye toward presenting artists in a smaller scale, more intimate surrounding,” he said. “The Dryden will be perfect for artists like Her Crooked Heart, where the audience will be very close and more interactive with the music.”

Tickets for Her Crooked Heart are available from the CLC Theatre Box Office at (218) 855-8199 or online at www.clcperformingarts.com

The show, and the entire season, is sponsored by a grant from the Minnesota State Arts Board as part of a legislative appropriation through the legacy amendment.