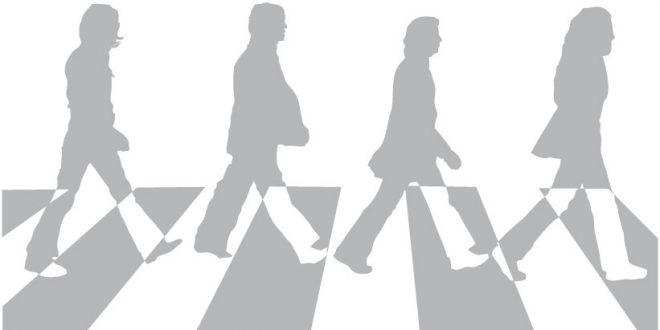 One of the greatest albums in popular music history will come to the Chalberg Theatre stage when Collective Unconscious performs ‘Abbey Road’ on Saturday, May 11. As part of the Central Lakes Community Performing Arts Center’s Cultural Arts Series, the band will perform at 3 p.m. and again at 7:30 p.m.

Local audiences are familiar with Collective Unconscious primarily through their partnership with the Fabulous Armadillos for ‘Takin’ it to the Limit,’ an Eagles tribute show. What audiences may not know is that the band has been performing their own music, in addition to albums that have been made famous by other artists. Although various musicians have played with the band throughout the years, the core group of Engholm, Muggsy Lauer and Nathan Nesje has stayed the same. George Mauer, Stacy Bauer, and Andy Deckard also perform with the band. The name Collective Unconscious refers to the melding of styles.

The group put together the ‘Abbey Road’ tribute show in 2005. The band, along with special guests, performed the album in its entirety. It also was a chance to play their original music, which they performed during another act of the show.

“The whole idea of doing ‘Abbey Road’ was to get people in the door so they could listen to our originals, with the idea that we want to sell albums,” Engholm said.

“We’re not trying to be the Beatles,” Nesje added. We’re just up there truly in tribute to the music and trying to be as respectful as we can for where the music came from and what it means to us,” he said.

Collective Unconscious has put together tribute shows of other iconic albums: ‘Pet Sounds’ by the Beach Boys, Simon and Garfunkel’s ‘Bridge Over Troubled Water,’ and ‘Deja Vu’ by Crosby, Stills, Nash and Young. These, in addition to their work with the Armadillos on the Eagles show and a Doobie Brothers tribute have earned them a reputation in the state as consummate musicians. Nesje said he was told by Dave Campbell, host of “Radio Free Current” on The Current, that Collective Unconscious’ shows helped spark a tribute show movement throughout the state of Minnesota, including their native St. Cloud and the Twin Cities.

With hits like “Here Comes the Sun”, “Come Together”, “Something”, and “Octopus’s Garden”, the ‘Abby Road’ album is a joy to listen to and even more fun to watch!  Side two, with its signature medley beginning with “You Never Give Me Your Money” takes on a whole new level of entertainment when experienced live.  The first half of the show will feature a retrospective of the Beatles work in chronological order showing the development of the sound and the writing that led to their pinnacle recording, ‘Abbey Road.’  Historical trivia, lots of laughs, and of course, the authentic sounds of the one and only Beatles, make this show a must see.

Tickets for Collective Unconscious’ ‘Abbey Road’ are available from the CLC Theatre Box Office at (218) 855-8199 or online at www.clcperformingarts.com

This event is sponsored by Applebee’s Restaurant and Katie and Randy Lee of Edina Realty. The season is made possible in part by the voters of Minnesota through a Minnesota State Arts Board operating grant, thanks to a legislative appropriation from the Arts and Cultural Heritage Fund.