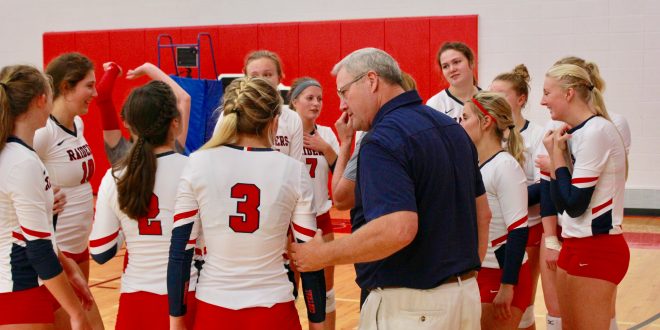 Friday was action packed with a stellar evening of volleyball. In head coach Jane Peterson’s 27th season coaching the Raiders Women’s Volleyball team, the Raiders are showing great promise. In their eight games this season, they only have two losses on their record. One of those losses came Friday night vs. North Dakota State College of Science in four sets. Luckily, later on that night, the Raiders had a chance to redeem themselves vs. conference foe St. Cloud Tech. 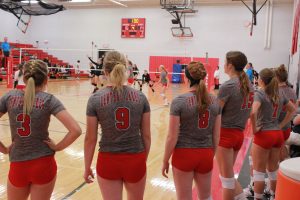 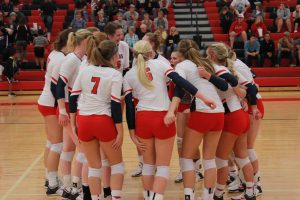 In the first of their two games friday, the Raiders fell to the Wildcats three sets to one. After winning the first set 25-23 the Raiders looked awesome. The next three sets had Wildcats written all over them as they sucked the life out of the gym sweeping through the next three sets. When head coach Jane Peterson was asked about how she felt the game went, she said her girls just made a lot of mistakes. “We made a lot of errors and we missed a lot of serves. We have to have more mental toughness and pay closer attention to our fundamentals because they are important,” she said.

Peterson had great respect for the opponent, saying “They’re (NDSCS) better than most of the teams we play.”

However, coach Peterson was not satisfied with the result of the game because she felt her girls could’ve won. “We had an opportunity to win, we just have to better seize our opportunities next time,” she said.

This lost was an excellent learning experience for a team still trying to figure out their identity. Last season, the Raiders were led by All-American offensive stud Rachel Mathias. Without her this year, the Raiders are actually harder to defend because of their well rounded versatility versus going to Mathias for all of the points.

St. Cloud Tech went on to defeat NDSCS in the first half of their double header before playing CLC. CLC vs. St. Cloud Tech was the perfect matchup and looked like it would never end as both teams went back and forth for most of the night. Although the Raiders took the first two sets, that didn’t stop the Cyclones from playing hard and keeping their hopes of winning alive. Just when it appeared the Raiders would pull off the sweep, St. Cloud took the next set forcing a fourth set.

The fourth set went back and forth as the Cyclones and Raiders stayed neck and neck until the bitter end. For a large portion of the match it looked as if the Raiders were about to let this game slip out of their hands. However, the Raiders came out on top in the fourth set 25-22 thanks to some big games from Sophomore Kayla Larson, Freshman Paige Wallevand and Cassie Smieja.

“We knew they were going to come back strong because they wanted to beat us,” Wallevand said.

Sophomore Kayla Larson also had an outstanding game. On the offensive end she had 10 kills in 16 total attempts. When asked on if the Cyclones momentum had the Raiders a on their toes during their comeback, Larson said “It’s like a good scare where you want it so bad you give it your all.”

After the first lost to NDSCS the Raiders knew they couln’t drop two in a row. “The first game made us better,” said Wallevand.

In order to win the second game Larson talked about how the team needed to trust each other. “We had to make sure we trusted each other to have each others backs. We had to trust that we could get the job done.”

Fortunately the Raiders got the job done and improved to 6-2 on the season.