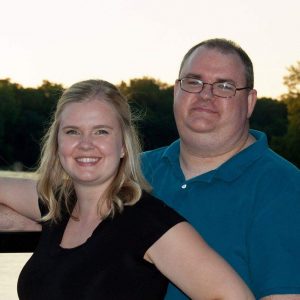 Chris Bolstad and Amber Tappe love the Central Lakes College Community Band. It’s where they met. It’s where they’ve spent countless hours practicing. And it’s members are who they’ll be spending their honeymoon with in June.

Chris and Amber both agree that spending the days after their wedding riding in a bus with 40 of their closest friends is the perfect choice. It’s just an added bonus that it’s in Ireland.

Chris, Amber, and the rest of the CLC Community Band are once again taking off for a travel study to Ireland June 17 for a 10-day tour, in which they will perform four concerts. The concert venues for the tour include the Blarney Castle, King John’s Castle, St Nicholas Cathedral in Killarney, and St Stephen’s Park in Dublin.

When the couple heard about the Ireland travel study, they figured it would be the perfect opportunity for a destination wedding. After all, Chris has a lot of family in Scotland. The pair will get married June 15 in a blacksmith shop in Gretna Green, a village in the south of Scotland famous for runaway weddings hundreds of years ago. They’ll have their reception in a nearby castle. And three days later, they’ll pile onto a bus with their band mates and travel Ireland, playing their music.

Making the Ireland travel study part of their honeymoon was a “no-brainer,” Amber said. (They’ll take a few days for themselves afterward in Iceland!)

Both Amber and Chris have a long history in the CLC Community Band. She started when she was 13, and has been involved on and off for 14 years. Chris, now 40, has been in the band on and off since his senior year of high school. She plays the oboe. He plays the saxophone.

Amber says the CLC Community Band does much more than play music. To her, they are a second family.

“It’s such a supportive group,” she said. “It’s been really special to be a part of.”

Many of the band members will attend the wedding in Scotland prior to the travel study in Ireland.

Amber hopes more people will join in on the fun of the CLC Community Band.

“It’s a great environment to pull out your instrument and make some fun music with fun people,” she said. “We have all ages and all ability levels.”

Chris says he likes that it’s a big team. And that it’s a way to keep playing an instrument he spent so much time getting to learn.

At the end of the day, though, the CLC Community Band is a big group of friends, who Chris and Amber are happy to make part of their big day.

Help send the CLC Community Band off to Ireland

The CLC Community Band will leave on June 17 for a 10-day tour of Ireland, in which they will perform four concerts of American music. Conductor Steve Anderson has worked with members of the band for two years setting up this tour and selecting music, which ranges from John Philip Sousa to Henri Mancini to two Minnesota composers, John Zdechlik and Jeff Liebsch.

Find out more about the CLC Community Band here: www.clcmn.edu/liberal-artstransfer-a-a-degree-2/music/

And the Ireland and other CLC travel studies here: www.clcmn.edu/international-education-at-clc/travel-study-programs/