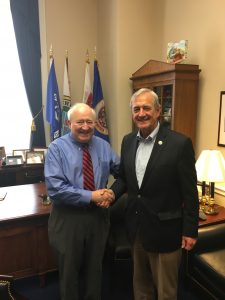 Steve Wenzel, instructor of Political Science at Central Lakes College, was invited to the Inauguration of President Donald J. Trump on January 20 in Washington, D.C.  Wenzel was fortunate to be in a special seating area relatively close to the Capitol platform where Trump was sworn in as President and where he delivered his inaugural address.  “It was a great honor and experience to attend the inauguration of the 45th President of the United States and to hear his inaugural address,” said Wenzel.

Wenzel stated, “I thought President Trump delivered a great address that focused on rebuilding America–both its infrastructure and its national defense and security.  We live in a dangerous world and President Trump, through his words, was telling the American people that he intended to deliver on his campaign promises.”

Wenzel said he was grateful to Congressman Nolan for getting him special seating and a great view of the inaugural events.

He also attended the congressional confirmation hearings in the U.S. Senate on the nominations for Energy Secretary, Governor Rick Perry of Texas, and that of the new incoming Secretary of the Treasury, Steven Mnuchin. These hearings were part of Wenzel’s research for his sabbatical program with Central Lakes College.

A piece of Wenzel’s sabbatical is to attend seminars by high-ranking U.S. officials as guest speakers as well as hearings on key legislation before the U.S. Congress. Since he was already in Washington for the inauguration, he decided to attend the hearings on the Senate confirmation of several of Trump’s Cabinet picks. The inauguration is beneficial to Wenzel’s sabbatical because he will have a short lecture on presidential inaugurations as part of his course work.

Following the inaugural ceremonies, while Wenzel was not able to meet the new President, he did get to meet and greet the American prelate of the Catholic Church, Cardinal Donald Wuerl of the Archdiocese of Washington, D.C. Cardinal Wuerl was elevated to the College of Cardinals by Pope Benedict XVI in 2010.

Wenzel said, “It was a special honor–and surprise–to have met him and to have been able to visit with him after church services at St. Matthew’s Cathedral in which he presided the Mass.” Wenzel attended church services at St. Matthew’s Cathedral on Saturday evening, January 21.  Earlier that day, Cardinal Wuerl led the prayer services for the post-inaugural event at the National Cathedral in Washington.  President Donald Trump and Vice President Michael Pence attended the service, which is traditional 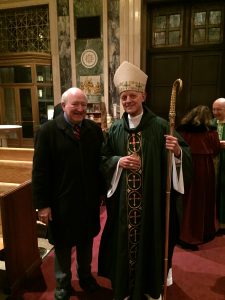 on the day following the inauguration of the President and Vice President of the United States.

In his homily at the service at St. Matthew’s Cathedral, Cardinal Wuerl emphasized the importance of showing respect for the inauguration of a new President and to pray for his success for the good of the nation. “I was very inspired by his words to the congregation on the importance of national unity. I personally thanked him for his words of wisdom,” stated Wenzel.

Wenzel concluded, “My meeting Cardinal Wuerl was a great conclusion to a great inaugural event in which we honored the inauguration of a new President and witnessed the peaceful transfer of power of the greatest and oldest democracy in the world–the United States of America!”