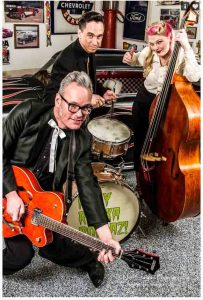 If it’s the classic early rock ‘n’ roll and rockabilly of Elvis Presley, Buddy Holly, Chuck Berry, Johnny Cash (and many more!) that you want, played just the way those legends played it…you have found your dream band! Minnesota’s own Holy Rocka Rollaz bring back the sound, the look, the memories and nostalgia of one of America’s most treasured eras. There’s nothing but pure early American Rock and Roll about them. The band will inaugurate spring half of the Central Lakes Community Performing Arts Center’s Cultural Arts Series, with a show at 7:30 p.m. on Friday, January 6. The concert will be in the Chalberg Theatre on the Brainerd campus of Central Lakes College.

From a review in RatRods Magazine, a publication devoted to the hot rod culture stemming from the 50’s, comes this description of the band: “Here’s a band that takes punk and rockabilly and slams them together make a high-energy style of 50’s rock that’s becoming a staple of the Minnesota car scene. They are the Holy Rocka Rollaz. Let’s be clear, though, this is NOT an ‘oldies’ band! There are no sappy love songs, no doo-wop or any of the other dreck espoused by the Hawaiian shirt and mullet set.”

Series producer Patrick Spradlin says the band is a good fit for this area. “We have a car culture in Brainerd, with two race tracks and thousands of fans. But the real draw of this band is their music. Our audiences love good music, played well by an enthusiastic and talented group of musicians. The Holy Rocka Rollaz are just that band!”

The trio consists of guitarist/vocalist Mark Flora, drummer Matt Alexander, and stand up bassist/vocalist Lisa Lynn. Their biggest musical influences are a combination of Buddy Holly and the Stray Cats, with some Ramones and Replacements thrown in. And what about their sound? Mark fires up his Gretsch Tennessee Rose through “some good ol’ tube amps” while Matt keeps rhythm on a Gretsch drum kit. Lisa holds it all together with a stand-up bass they got on eBay “because it was really cheap!”

Front man Mark Flora says his proudest moment came while playing the legendary Surf Ballroom in 2007. “Knowing that I was singing and playing guitar in the same spot on the stage Buddy Holly played his last show, well, it just gave me chills,” he said.

The band’s first show together was in the South Dakota State Penitentiary several years ago, serving in a ministry capacity, where Flora has been sharing good news to inmates since 2003. “We were having so much fun playing in the State Pen that we decided to take our music to car shows and other events. We really do enjoy playing 50s rock ‘n’ roll just the way it was played back in the day.  Seeing people light up when we really go for it brings this band a lot of joy. We hope we can do this for many years and for many people,” said Flora

Tickets for the Holy Rocka Rollaz are available from the CLC box office at (218) 855-8199, or online at www.clcmn.edu/arts

Sponsors of the show are Lakes Dental Care and the Central Lakes College Foundation. The entire CLC Performing Arts Center season is made possible in part by an operating grant from the Minnesota State Arts Board, thanks to a legislative appropriation from the Arts and Cultural Heritage Fund.

Previous Men’s basketball bounces back, improves to 4-3 against MN West
Next Pillager students get lesson in graphic design at CLC