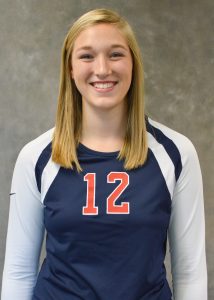 “Rachel gained a lot of confidence between her first and second seasons,” said Head CLC Volleyball Coach Jane Peterson. “You always want a sophomore to return with a little more fire and power and she did in a big way! She was just so consistently dominant – every single game we played. She carried a big load, without a complaint and without weariness. She was there for her team every day with a big smile and a happy heart.”