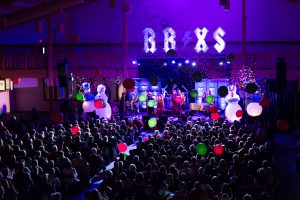 What do Led Zeppelin, Jethro Tull, Janis Joplin and Santa Claus have in common?

They’re all part of the Rock and Roll Christmas Show (RRXS). For the eighth consecutive year, the holiday season will be raucously kicked off when the RRXS show hits the stage for one show only, Friday December 16 at 7:30 p.m. in the Centre at Cragun’s Resort. A social hour begins at 6:30. As part of the Central Lakes Community Performing Arts Center’s Cultural Arts Series, it’s a show that series producer Patrick Spradlin calls “something you have to see to believe.”

“When I was first approached about presenting this show, I was skeptical,” said Spradlin. “I mean, ‘The Little Drummer Boy’ played in the style of the surfer song ‘Wipeout’? I couldn’t imagine it.”

Skepticism was quickly replaced by awe, according to Spradlin, when he saw the show at the Pioneer Place in St. Cloud. “I’d never been to a show where two things that were so familiar to me—Christmas songs and the stylings of particular rock bands—were blended to create something so incredible. I was sold after the third song.”

The show’s creators convinced Spradlin to give the show a try in Brainerd, with immediate success. “It’s one of the shows I will present every year it’s available,” said Spradlin. “I think there’d be a revolt in the streets if I left them off the schedule.”

“This will be the eighth appearance for RRXS, but the show is always different,” said Spradlin. “I spoke with the band and was told audiences could expect a lot of new material, a new opening sequence, a new closer, and a new CD on sale in the lobby.” The addition of new material really isn’t an issue though, according to Spradlin. “So far, without much advertising, we’ve sold over 500 seats for the show. I expect we’ll be close to selling out.”

The show is being held in a venue that allows for a rockin’ good time, according to the producer. “Last year we moved the show to the Cragun’s Centre, and our audience loved the change of atmosphere,” said Spradlin. “Being able to mingle with others at the 6:30 social hour prior to the show was a real plus. And, our audience was able to enjoy a cup, or two, of cheer during the show. The folks at Cragun’s are even offering a stayover special rate if people really want to cut loose.”

RRXS is the creation of Ted Manderfeld and Paul Diethelm, two talented musicians from the St. Cloud area who bring impressive resumes to the work. They arrived at the idea of the show and set out to find the perfect musicians and singers to make their vision a reality.

Manderfeld is half of Deuces Wild Dueling Pianos, which performs over 120 times a year across the country and Mexico. “We’ve played for corporate clients, casinos, country clubs, and some pretty exclusive night clubs all over the country,” said Manderfeld. Ted co-produces the Billy Joel and Elton John tribute show “Eye 2 Eye” with former Bobby Vee and GB Leighton keyboardist Greg Armstrong. He has also spent time in the studio as jingle writer, recording artist and producer. He has performed as an actor and even a game show host, and brings a high energy showmanship to the RRXS.

Paul Diethelm is a veteran of over 30 years of live performance, studio recording and songwriting. Born and raised in Watertown MN, Paul moved to St Cloud, and in 1989 formed the band Slip Twister. They quickly grew to become a midwestern perennial favorite. As an eight year member of the Jonny Lang Band, Paul toured the world and shared the stage with rock and blues legends including Aerosmith, B.B. King, Sting, and the Rolling Stones. He has made multiple appearances on national T.V. shows including David Letterman, Jay Leno, and Conan O’Brien. Paul is a magnetic performer, a world-class guitarist and has played on two Grammy-nominated recordings, including the platinum selling Jonny Lang album “Wander This World,” for which he also co-wrote the hit single title track, and most recently the “Pinetop Perkins and Friends” album where he appears on tracks with Eric Clapton, BB King & Jimmy Vaughan. Diethelm is a founding member of The Fabulous Armadillos.

Pamela McNeill is a lead vocalist with the show. Her credentials as a performer in the Twin Cities is legendary. In the words of Minneapolis / St. Paul magazine, “Country-rock siren Pamela McNeill cooks like grease on the griddle!” Besides songwriting for her 4 critically acclaimed solo albums, Pamela has also penned songs for artists such as Wynonna (Judd) and Yanni. Based in Minneapolis she has developed a fervent following in the Midwest and in 2007 was featured in the book “Music Legends – A Rewind on the Minnesota Music Scene,” written by Martin Keller. McNeill is a frequent performer with The Fabulous Armadillos, and also is the driving force behind “Rumours and Dreams”, a tribute show to the music of Fleetwood Mac.

Stacy Bauer is a powerhouse vocalist that has been with RRXS since the beginning. Having headed the popular midwest Led Zeppelin tribute band, Blimp, Stacy was a perfect candidate to come in and round out the list of vocalists for the RRXS. Besides being a member of Blimp, Stacy is a member of the Stearns County Pachanga Society and was recently asked to perform shows with Janis Joplin’s former band, Big Brother and the Holding Company in a string of sold out shows. Audiences are astounded at the voice that comes out of this seasoned performer.

Vocalist Tim Haussner has been a singer/songwriter/guitarist for many different groups in the past 10 years. He has played thousands of shows at: large festivals, back yards, coffee shops, bank openings, weddings, pizza joints, clubs, body builder competitions, garages, theaters, and holes in the wall from Minnesota to Alaska.

Billy Thommes is a world-class, powerful drummer whose musicality and professionalism make him the perfect choice to match the varied musical styles in the show. Billy is an in-demand musician in the Twin Cities for touring and studio work. With versatility as his calling card, he’s backed up a wide range of artists, from the blues rock of Jonny Lang , Indigenous, Bernard Allison and Sue Foley, to the Minneapolis rock of Soul Asylum and the Honeydogs.

Bassist Mike Zeleny has been one third of one of the midwest’s most popular and sought after bands, Slip Twister. Along with Paul Diethelm and drummer Jay O’Donnell, Mike has played innumerable shows all over the region and proven to be an essential part of the rhythmic backbone of every show he is in, including RRXS, Billy and Elton Eye 2 Eye, The Fabulous Armadillos, and Deep Seven.

Mike Kreitzer, on saxophone and flute, is a multi-instrumentalist that has also been a part of the RRXS since its inception. He’s played in numerous bands for more than two decades and often featured with The Fabulous Armadillos. His favorite part of the RRXS show is the response from the crowd when he plays his flute on “God Rest Ye Merry Gentlemen”.

Tickets for the Rock and Roll Christmas Show are available from the CLC Theatre Box Office. Orders can be placed by phone at (218) 855-8199, or can be purchased online at clcmn.edu/arts

Sponsors for the show are Good Neighbor Home Health Care and Jack Pine Brewery. The entire CLC Performing Arts Center season is made possible in part through an operating grant from the Minnesota State Arts Board as part of the Legacy Amendment.