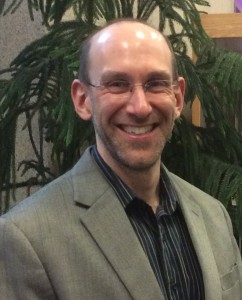 “Adam really is a great example of the quality educators we have at the college,” Lundblad said. “He was nominated by his peers. He was chosen for his work with the Honors Program, his innovations in the classroom and his strong student focus.”

Marcotte will represent CLC at the BOT Award ceremony in St. Paul in April and will be under consideration for selection as MnSCU BOT Educator of the Year.

Previous CLC educators to receive this honor include Darci Goeden and Betsy Picciano.

Marcotte said being named the 2016 CLC Outstanding Educator of the Year is a great honor.

“I was lucky in school and had amazing and inspirational teachers who helped me along,” he said. “My objective at CLC is to pay their generosity forward and help my students achieve their own goals.”

His teaching philosophy: “I never want students to just be successful, I want to them to be wildly successful, to be transformed. Helping them do that is the best part of my day, and I wouldn’t choose to do anything else.”