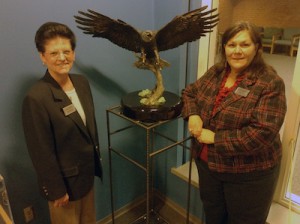 Central Lakes College announced today that the Skone Family, on behalf of the late E. Terry Skone, has made a donation of the “The Creator’s Messenger,” a limited edition bronze American bald eagle sculpture, for inclusion with the Pete Humphrey Indian Collection, housed in the Skone Family Conservatory.

The sculpture enhances the college’s educational collection, which was carefully selected by Pete Humphrey and the Mille Lacs Band of Ojibwe, to teach about the culture and philosophy of the Ojibwe.

“The Creator’s Messenger” has a wingspan of nearly 36 inches and stands above its base more than 25 inches. This beautiful piece of art was part of Terry Skone’s personal art collection at his home on Bay Lake in Deerwood.

“Many Ojibwe hold Migizi (eagle) in high esteem. Our teachings explain that Migizi is the messenger from the Creator. Migizi is often viewed as a symbol of courage, healing and strength,” said Mary Sam, director of Diversity, Equity and Tribal Relations at CLC. “It is fitting that this beautiful Migizi has found a new home at Central Lakes College, as our students are courageous, some are healing, and all are becoming stronger individuals as they strive to fulfill their dreams and goals.”

Pam Thomsen, CLC Foundation director, added, “The Skone Family Conservatory was established through generous funding from Terry Skone, a member of the CLC Foundation Board of Directors, and his family. This facility was designed primarily to house the Humphrey Center for American Indian Studies. The library consists of thousands of volumes on American Indian culture, history and language. Terry and his family also established several generous scholarship funds to benefit CLC students.”

“The Creator’s Messenger” sculpture artist, Kitty Cantrell, is known throughout the world as one of the leading sculptresses of wildlife. Another American bald eagle sculpture by Cantrell named the “Windwalker” is housed in the lobby of the CIA in Washington, DC.

Terry Skone’s brother, Brian Skone said, “Terry was an ardent supporter of CLC and believed that promoting education in the community was one the most important contributions one could give back to the community. He would be very proud that his Eagle will soar at CLC forever.”