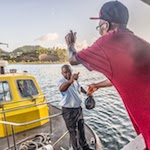 The
island nation of Grenada may refer to itself as the “Spice Island” for
its amazing culinary diversity but older citizens of the USA will recall
the 1984 U.S. military invasion of tiny Grenada ordered by President
Ronald Reagan.  When it was over, socialist leader Maurice Bishop and
his entire cabinet were dead.  Their bodies were never found and no one
is certain exactly how they met their fate.  By force, Grenada’s economy
was diverted from socialism to capitalism.
In
January, Central Lakes College sociologist Gary Payne toured Grenada to
get a feel for how that nation is managing its affairs on the 30th
anniversary of the invasion.  Payne will be presenting his photographic
images in two presentations on April 3rd for CLC’s Cultural Thursday
Program which is free and open to the public.  The early presentation
will be at noon, the next at 7 p.m. Both shows will be in room E354
(lecture hall) at CLC.  Come early to assure seating.
Grenada
is the southernmost island of the lesser Antilles, just east of
Venezuela.   It is a tropical environment on an island no larger than
Crow Wing County.  The presentation will include the history, climate,
people and animal life of the island.
Share